Mechanical Foreman Alexander MacGregor worked within Estates and Buildings for nearly 38 years and retired on Friday.

Alex jokes that when he joined the University on 17 October 1977 he had only planned to stay for six months.

A great deal of Alex’s time was spent working in the boiler house in front of the Davidson building. He spent his time both supervising the workforce and maintaining the boiler house which has served the University community for nearly 50 years.

His retirement coincides with the decommission of the boiler house.

Temporary steam boilers are currently being used to heat the Gilmorehill campus while the District Heating Project is taking place. The old boiler house will eventually be incorporated as part of the new energy centre.

Robert Kilpatrick, Direction of Estates and Buildings, said: “Alex is an uplifting, people person and is great for cracking jokes. He worked here for an outstanding 37-and-a-half years and got to know a great deal of people in that time. It has been a real pleasure to work with him and he will be much missed.”

Along with gifts, cards and a bumper joke book the E&B team presented Alex with the pressure gauge from boiler number 3 in the old boiler house as a memento from his time at the University.

Alex said: “I’m overwhelmed and want to thank you all. I’ve grown up with a lot of the staff here and it has been great working with you all. I couldn’t have done my work without the work you all do. It has really been my privilege to work here.”

Alex is looking forward to spending more time with his family during his retirement, especially his young grandson. 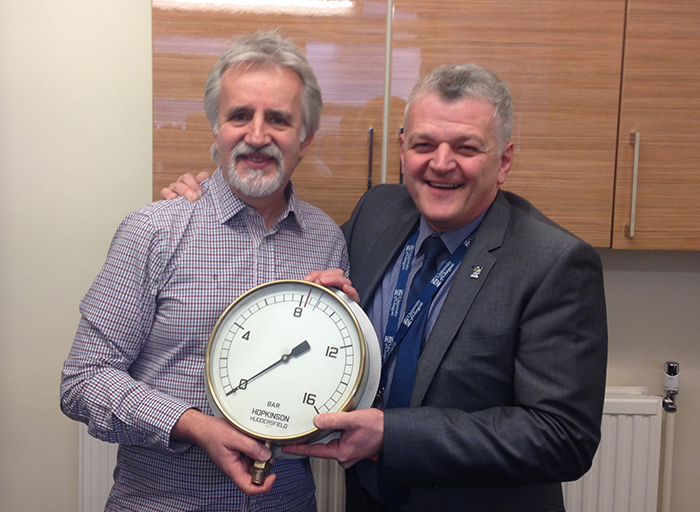