A history of women on campus

She was the wife of Malcolm III and was a pious woman devoted to the Church and to charitable works. According to Frances Melville, Mistress of the College for twenty-five years (1910-1935), the Queen’s name was a “happy choice” because she “brought civilisation and learning to Scotland”. 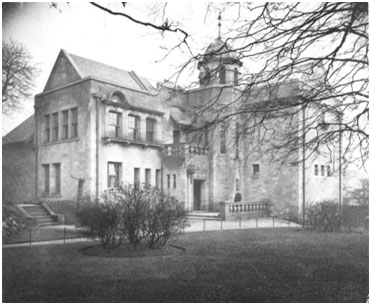 Queen Margaret College opened in 1884 in North Park House, a mansion located on the west bank of the River Kelvin.

The house was built in the late 1860s for two Glasgow merchants, John and Matthew Bell.

It was acquired and gifted to the College in 1883 by Mrs Isabella Elder.

In 1894, the University demonstrated its strong commitment to the education of women when it commissioned the Queen Margaret College Anatomy Building– the first of the new laboratory buildings to be built.

Designed by Honeyman & Keppie, it appears that Charles Rennie MacIntosh was involved in the design (at the time he was a draughtsman at the firm).

In 1936 Robertson Hall was opened at 1 Lilybank Terrace and merged with Lilybank House. Due to an increased need for housing after the Second World War the University acquired and converted nearby houses in Bute Gardens.

Melville House, located at 9 Bute Gardens, was opened in 1946 and named after Frances Melville, while Galloway House, located at 18-19 Bute Gardens (a small hotel previously owned by a Mrs. Mackay) was named in honour of Janet Ann Galloway, she was Queen Margaret College’s secretary for thirty-two years (she is also remembered through a commemorative window in Bute Hall).

In 1948 the house of 20 Bute Gardens was added to Galloway House, and in 1958 Southpark House became the fifth home of Queen Margaret Hall. In 1964 the assemblage of five houses served 114 women students and six members of the teaching staff.

A new Queen Margaret Hall was opened in Bellshaugh Road, Kelvindale on 6 November 1964. Two wings of study-bedrooms were named Galloway Block and Melville Block in commemoration of the early pioneers of Queen Margaret College. The building was demolished in 2000 and modern accommodation was built on site and opened in 2002. 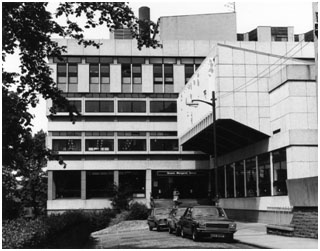 The Queen Margaret Union was first located in a house in Buckingham Terrace in 1890. Through funds raised by a big Bazaar, the Union moved to a larger location on Ann Street (now Southpark Avenue).

When the men’s union acquired new premises at the foot of University Gardens in 1930, their old union (now the John MacIntyre Building) – described scornfully at the time as “that rat-hole” by the Lord Rector Mr. Stanley Baldwin – was given to the students of the Queen Margaret Union.

Assisted handsomely by the University Court, the QMU refurbished the building fully.

In 1932 these refurbished premises were regarded as “the finest women students’ club in the Kingdom.”

Growing student numbers put pressure on the Union for a third move. The Queen Margaret Union moved to its present location on University Gardens which officially opened 14 March 1968. 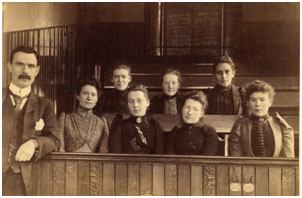 The Gilchrist Postgraduate Club opened 26 October 2012 and is located in the basement of the Gilbert Scott Building’s Lower Halls. The club is named in honour of Dr Marion Gilchrist.

In 1890, Gilchrist was one of nine women who enrolled in the newly-opened Medical School at Queen Margaret College.

Gilchrist gained the distinction of being the first female medical graduate by winning a high commendation.