A significant stage in the University of Glasgow District Heating Project was reached this weekend (1 February) when large, temporary steam boilers were installed in two locations on the Gilmorehill campus. 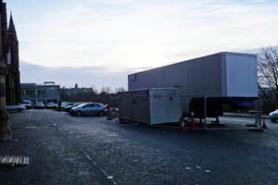 ‌The units, housed in large shipping containers, will maintain heating in the Kelvin building and the Main Gilbert Scott building as the work progresses to replace the existing system that dates back fifty years and has reached the end of its working life.  The next twelve months will see extensive construction work to prepare for a sustainable, lower-carbon future.

Already a central compound including workshops has been erected by the main contractor, Crown House Technologies Limited. This has reduced the number of parking spaces available outside the Boyd Orr Building.

As work progresses on a rolling basis, some parking will have to be suspended and some vehicle and pedestrian routes may also be temporarily restricted while trenches are dug for the new replacement pipework.

‌Initially, the construction work will proceed in the vicinity of:

Over the course of this year, most of the Gilmorehill Campus will be affected at one time or another, including the areas on the other side of University Avenue.

Crown House Technologies Limited, working with the University, aims to offer the project as a teaching opportunity to some engineering students. It's hoped that some local apprenticeships will also be created.

If you have questions about the district heating scheme, or are concerned about the impact of the construction work, contact: communications@glasgow.ac.uk