A pat on the back from Nobel Prize-winner Professor Peter Higgs can't be bad for a science undergraduate and two University of Glasgow students have received just that.

Julie Lynch and Stuart McGibbon, both taking Physics at the Universiry of Glasgow, were winners of this year's Higgs Prize.

The prize rewards pupils who show a particular aptitude for the subject. There were four winners in total and they met Professor Higgs and also the First Minister, Nicola Sturgeon MSP and Education Secretary Angela Constance when they collected their awards. The winners were:

As part of the Scottish Government funded prize, they will travel to the internationally renowned CERN research facility in Switzerland in July to attend lectures and seminars on physics as part of the summer school programme, as well as talking to Scottish researchers about their work at the facility and their careers in physics.

Professor Higgs said: “Everyone in life has people that they admire and strive to be like – my own inspiration was Paul Dirac, a man who won the Nobel Prize for Physics in 1933 – and I’m honoured that an award in my name is used as inspiration to the younger generation of physicists.

“I congratulate Eilidh, Julie, Stuart and Raheem on winning this prize and I am sure they will have an amazing time at CERN where they will learn from the very best. I hope these four promising young talents go on to became esteemed in their own right.” 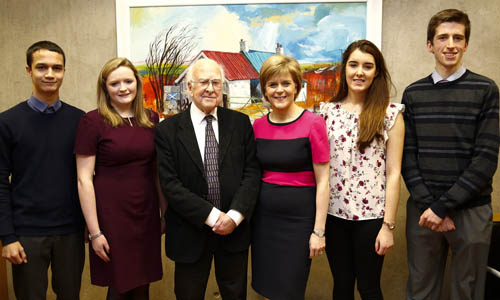