When a picture speaks a thousand words 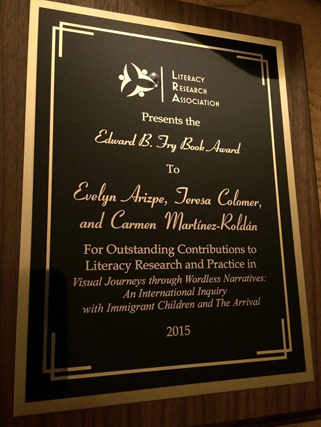 One of the most prestigious prizes for literacy research and practice in the United States has been awarded to a team led by the University of Glasgow’s School of Education for a book which investigated how picturebooks can support the literacy skills of immigrant children and help them reflect on their own and others’ experiences of migration.

Visual Journeys through Wordless Narratives, co-authored by Dr Evelyn Arizpe in Glasgow, Professor Teresa Colomer in Spain, and Dr Carmen Martínez-Roldán in the USA, has won the Edward B. Fry award from the Literacy Research Association of the United States.

Dr Arizpe, who led the international study, said: “Our approach is to use well-crafted children’s books in the classroom, particularly picturebooks and graphic novels, because they have a visual element that immediately enables children to engage with reading.”

“Picturebooks address issues in ways which help the children think about them more critically and creatively and not only do they develop literacy competencies and cognitive skills, they also develop empathy and inter-cultural understanding.”

Dr Arizpe, who worked in Glasgow schools with colleagues Dr Maureen Farrell and Ms Julie McAdam, found that their strategy of using Shaun Tan’s book The Arrival as a basis for discussion and learning gave teachers mechanisms to tackle difficult issues around migration with Scottish children as well as refugee and asylum-seeking pupils.

“Immigrant children try very hard at school. Often it is the local children who don’t really don’t understand what they have been through and who are susceptible to negative stereotypes. When you give them a book that allows them to put themselves into the immigrant child’s shoes, they begin to understand,” she added.

A parallel study in Sydney, Australia with another wordless picturebook informed the project, while the research carried out in Bologna in Italy is described in the Coda in Visual Journeys. An extension of the project, Journeys from Images to Words, funded by The Esmée Fairbairn Foundation, won the BERA-Routledge 2013 prize (http://www.journeys-fromimagestowords.com/).