Meet Dr Sean Adams, he is a lecturer of Theology and Religious Studies here at the University of Glasgow. Theology is one of the University’s oldest subjects and has been taught since the very start in 1451. 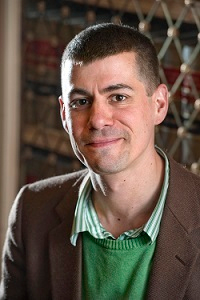 Sean’s research and teaching interests lie in the subject of the New Testament and ancient culture. He is the sole New Testament specialist at the University.

Sean said: “My work looks at the New Testament and how it fits within its ancient world and I focus on placing them in their Greco-Roman and Jewish contexts.

"The New Testament was written in Greek by Jews, so I look at how Jewish people engaged with Greek culture. I read ancient Greek - it’s actually not that hard to learn!”

Sean grew up going to church with his family and this sparked his interest in theology.

He said: “I really enjoyed reading the Bible because there are some really interesting stories in there.

“By reading the Bible I discovered a love for ancient history. I found by learning more about one it built upon the knowledge I had of the other.

"This knowledge of ancient history and the Bible really grabbed me. I researched the topics because I liked it and I found it interesting and apparently I can now make a job out of it!”

Coming to the University of Glasgow

Originally from Hamilton, Ontario in Canada, Sean met his wife Megan while at university in his home town. They both moved to Scotland in 2008 and Sean studied for a PhD in New Testament and Christian origins at the University of Edinburgh.

After completing his PhD, Sean had the opportunity to travel to Sri Lanka to teach in a bible college and seminary.

Sean said: “It was an interesting experience; it was very different to teaching here. I was the youngest person in the classroom even though I was the teacher. Initially my age was a problem. Age matters in Sri Lanka and with age comes respect and the right to speak. At the start I had to contend with some of the older gentlemen speaking over me but once I proved I had knowledge I earned the right to speak. I learned a lot about different communities and how the bible is taught in other places.”

On returning to Scotland, Sean was awarded a British Academy Postdoctoral Fellowship which he held at the University of Edinburgh. This funded a project which involved researching the many ways Jewish authors interacted with Greek literary culture.

Sean is relatively new member of staff at the University of Glasgow. He came to the University to take up his lectureship post in September last year.

He said: “The University of Glasgow is an inspiring place to work because of its rich history of biblical studies. Brilliant scholars and New Testament experts have taught here and I’m happy to be part of that.”

"I like both teaching and research as they feed off each other."

At the beginning of term he spends the majority of his time preparing course material. He spends between eight and ten hours preparing per class, with some classes requiring up to 15 hours of preparation.  During the summer he plans to continue with his own research.

Sean said: “I like both teaching and research as they feed off each other. Teaching forces me to go back to basics and express myself clearly. Research allows me to explore new ideas.”

Sean has recently been awarded a Rising Star Engagement Award by the British Academy worth £15,000.

Later this year Sean is holding a conference at the University of Glasgow on ‘The Future of Academic Publishing’.

A main aim of Sean’s conference is to start a conversation about how open access to publications will work and how it will affect academics. He plans to invite academics, librarians, representatives from publishing houses and government representatives.

Following the conference an online platform will be built where videos and audio recordings of the talks and information sessions will be made available. It will also be an opportunity for the conversation to continue online. Sean is currently in the midst of planning and the conference will be held in October.

He said: “This is a transitionary time for the publishing industry and that affects academics. The decisions that are made now are going to affect my career and my colleagues. I want to make sure those decisions are well thought out.”

Sean is always thinking about future academic projects. He says: “Academics always have to have a plan”.

The next project he is planning to undertake in the near future will be to write a commentary on the book ‘On Mating with the Preliminary Studies’ by Philo.

Sean currently lives in Glasgow with his wife, Megan, and one-year old son, William, who he describes as “adorable and very spirited”. He has enjoyed his time in Scotland so far and has no plans to move any time soon.

Sean said: “There are lots of things I love about Scotland.  I love the oldness of the country compared to Canada. I love that I can walk to work because in Canada no one walks! Given the snow amount we get in Canada during the winter, I don’t really mind the weather here!”