Representatives of the University of Glasgow marched in this weekend's Tartan Day celebration in New York. 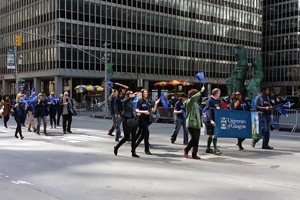 New York's Tartan Day observance recognises and celebrates, through readings and music, The Declaration of Arbroath, signed on April 6, 1320 and the US Senate’s designation, in 2005, of April 6 of each year as “National Tartan Day”. A Presidential Proclamation was signed into effect by George W. Bush in 2008. The event is presented by the American-Scottish Foundation. It marks the start of a week of concerts and cultural events which are all offered free of charge to visitors.

Photo is courtesy of Dr Peter Murray, Postdoctoral Research Associate in the School of Physics and Astronomy. Peter Tweeted: "Go a walk in Central Park and then bump into @GlasgowUni parading in NY Tartan Day Parade."