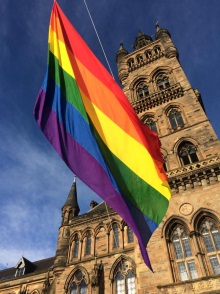 LGBT+ Network – The University of Glasgow Lesbian, Gay, Bisexual & Transgender + Network was one of the first in Higher Education in Scotland. The network welcomes all academic and non-academic staff, PhD students. The network aims to provide a welcoming environment in which LGBT staff can:

The University believes individuals can inspire and empower others to change the world. Our staff Role Models share their experiences of being LGBT+ in their workplaces at the University and aim to show that being yourself should never be a barrier to success.

Read all about our fantastic Role Models

Supporting our LGBT+ colleagues in their careers

Lesbian, gay, bi and trans people bring value to organisations by providing a different set of experiences and perspectives. The University recognises the benefits of these perspectives and may support suitable candidates for the following programmes, as part of our Diversity Champion programme participation.

If you think these programmes are for you, please review Stonewall's programme information to find out more then speak to your line manager.

This two-day residential programme brings together senior leaders who identify as LGBT from across a range of sectors and industries. You will reflect on what it means to be an authentic leader and explore how to create a more inclusive culture within your organisation.

Stonewall Scotland believes in the power of stories to inspire individuals and empower people to create change. Read their Scottish Role Models guide which aims to highlight the diversity of Scotland’s LGBT community and show that being yourself should never be a barrier to career success.

Supporting a colleague or student to Transition gender?

Find out what you need to know if you are supporting a staff member or student who is transitioning gender.

There is a lot of information out there, some of it specific to Higher and Further Eduction too.

The EDU can assist you but please take the time to review the following resources.

LGBT+ and going abroad to work?

Make sure you know what to expect before you go.  You can do some research by using these external websites.  Although these external sources are reputable, please use this information with caution.

If you have concerns speak to your line manager.

FCO's Foreign Travel Advice  - For the latest travel advice by country including safety and security, entry requirements, travel warnings and health.  Find the country you are considering visiting, and click on the 'Local Laws and Customs' link.

International Lesbian, Gay, Bisexual, Trans and Intersex Association - Every year, ILGA produces maps on Gay and Lesbian rights in the world as well as its State Sponsored Homophobia report. You can download them from their site.

AIG have developed a page for LGBTQ Travel Safety Tips.

Check out the latest University's Pre-Departure Guide for students going abroad as part of their studies.

The University of Glasgow is proud to be a Stonewall Scotland Diversity Champion displaying our commitment to equality for LGBT staff, students and potential staff and students.

As a Diversity Champion we have access to best practice in policy and procedure development, networking opportunities with other organisations, and an opportunity to bench mark ourselves against competitors.

What is a pronoun?
Words used to refer to or by people talking (I or you) or when someone or something that is being talked about (she, he, it, them, and they).

Gender pronouns (for example he/she) specifically refer to people that you are talking about. Some people may prefer others to refer to them in gender neutral language and use pronouns such as they/their and ze/zir.

OK, so what's a Gender Neutral Pronoun?
A gender neutral or gender inclusive pronoun is a pronoun which does not associate a gender with the individual who is being discussed.

For example: "They (meaning just Ashley) emailed over all the information you need" or "Ashley sent their notes around before the class" and "Ashley needs that report, can you print it off for them?"

Find other examples of pronouns at www.transstudent.org/pronouns101/

How do I ask someone what pronouns they use?
Asking and correctly using someone’s pronouns is one of the most basic ways to show your respect for their gender identity. If you are unsure of a colleague's or student's preferred pronoun, first and foremost you should listen, both to them and any others close to the individual who may use the correct pronouns.  If in doubt, respectively ask which pronoun the person uses.

Try asking: “What pronouns do you use?” or “Can you remind me what pronouns you use?” It can feel awkward at first, but it is not half as awkward as making an assumption.

If you are asking as part of an introduction exercise and you want to quickly explain what gender pronouns are, you can try something like this: “Tell us your name, where you come from, and your pronouns. That means the pronouns that you use in reference to yourself."

What if I make a mistake?
It’s okay! Everyone makes mistakes from time to time. The best thing to do, if you use the wrong pronoun for someone, is to say something right away, like “Sorry, I meant (insert pronoun)”

If you realise your mistake after the fact, apologise in private and move on.  It can be tempting to go on and on about how bad you feel that you made the mistake or how hard it is for you to get it right. Please don’t! It is inappropriate and makes the person who was misgendered feel awkward and responsible for comforting you.

Why is it important to respect people’s pronouns?
When someone is referred to with the wrong pronoun, it can make them feel disrespected, invalidated, dismissed, and alienated.  Repeated and purposefully using an incorrect pronoun however, constitutes bullying and harassment.

What can I do to make it easier for others, even if I use the more commonly used pronouns?
1. Indicating your preferred pronouns in your email signature helps to normalise an action that makes it easier for transgender and non-binary members of our community to express themselves. It also helps other people feel confident that they are addressing you, as you wish them to.

2. You may hear one of your students or colleagues using the wrong pronoun for someone. In most cases, it is appropriate to gently correct them without further embarrassing the individual who has been misgendered. This means saying something like “Alex uses the pronoun she,” and then moving on.

3.  If others are consistently using the wrong pronouns for someone, do not ignore it. It is important to let those who have been misgendered know that you are their ally.  It may be appropriate to approach the individual who has been misgendered and say something like “I noticed that you were being referred to with the wrong pronoun earlier, and I know that can be really hurtful. Would you be okay with me taking them aside and reminding them about your pronouns?” Follow up if necessary, but take your cues from the comfort level of the individual. Your actions will be greatly appreciated.

There are a wide range of words and terms that people may use to describe themselves, their identity, and their experience. It is important to note that the language and terminology used is constantly evolving and shifting, as communities and individuals develop new ways to articulate their identities and experiences.

Gay: Refers to a man who has a romantic and/or sexual orientation towards men. Also a generic term for lesbian and gay sexuality - some women define themselves as gay rather than lesbian.

Lesbian: Refers to a woman who has a romantic and/or sexual orientation towards women.

Bi: Bi is an umbrella term used to describe a romantic and/or sexual orientation towards more than one gender. Bi people may describe themselves using one or more of a wide variety of terms, including, but not limited to, bisexual, pan, queer, and other non-monosexual identities.

Homosexual: This might be considered a more medical term used to describe someone who has a romantic and/or sexual orientation towards someone of the same gender. The term ‘gay’ is now more generally used.

Cis or Cisgender: Someone whose gender identity is the same as the sex they were assigned at birth. Non-trans is also used by some people.

Gender Identity: A person’s innate sense of their own gender, whether male, female or something else (see non-binary below), which may or may not correspond to the sex assigned at birth.

Queer: In the past a derogatory term for LGBT individuals. The term has now been reclaimed by LGBT young people in particular, who don’t identify with specific categories around gender identity and sexual orientation.  Please note though, this term should not be used to describe anyone unless you specificaly know they use it to describe themselves.

Questioning: The process of exploring your own sexual orientation and/or gender identity.

Trans: This was the term most commonly used by participants to describe their status, identity or experience. 'Trans' quite literally means to go beyond or across, and its use in this context originates from the words 'transgender' and 'transsexual' - to traverse gender and / or sex. 'Trans' generally functions as an umbrella term to describe the experience / status of being a different gender from the gender assigned at birth.

Non-Binary: Describes identities that do not fit into the man/woman binary. Other terms include genderqueer and genderfluid.

Transgender: Similarly to 'trans', transgender also describes the experience / status of being a different gender from the gender assigned at birth. Increasingly, the short-form term - 'trans' - seems to be preferred and used most widely.

Transsexual: This term is sometimes used by people who change, or intend to change, aspects of their bodily sex. Whilst 'transsexual' has somewhat fallen out of popular usage in the UK, this term is still an important means for many people to articulate their experience. 'Transsexual' is not a derogatory term when used as self-identification, yet the term is not necessarily favoured or used by everyone.

Agender and no gender are terms used by some people to describe feeling outside of or without gender.