The Art of the Poster

More so than any of our predecessors, our generation has become concerned with the aesthetics of the street.
Roger Marx, Masters of the Poster, Paris, 1899

The late 19th century saw a remarkable transformation in the design and production of commercial posters. Demand for designs had grown, fuelled by growing prosperity, urbanisation and increasingly competitive markets. Technological developments – including chromolithography and steam-powered presses – revolutionised the printing process. These innovations were exploited by artists, first in France, and subsequently elsewhere in Europe and America, to create the first ‘artistic posters’.

This display presents a selection from The Hunterian’s extensive print collection and includes leading examples from the 1890s, from France, the United States, central Europe and Scotland. 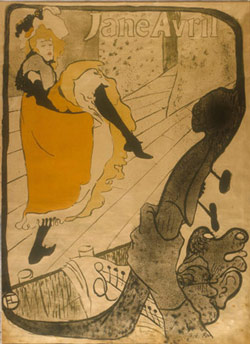 The most successful posters combined simplified forms, bold colours, dramatic viewpoints, and distinctive lettering. Inspiration ranged from early 19th century Japanese woodblock prints to the decorative draughtsmanship of Aubrey Beardsley. A wide stylistic range is apparent, seen in the contrast between Lautrec’s unflinching depictions of Parisian cabaret stars and the idealised women of Mucha, or the colourful vivacity of Chéret and the geometric boldness of the Glasgow and Austrian designers.

Posters are also important social history documents, illustrating consumerism, fashion and class. From the 1880s, artistic posters became highly prized art objects, pursued by collectors. In large part because of this, what is an essentially ephemeral art form has been preserved for us to enjoy today.

The Hunterian will close from 25 December 2011 until 3 January 2012 inclusive for the Christmas and New Year holiday.

The conservation and framing of selected works were supported by a grant from Museums Galleries Scotland.