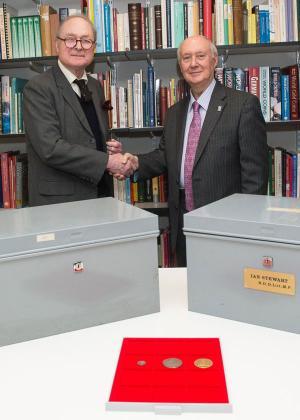 Ian Stewart, Lord Stewartby (1935–2018) embarked on a remarkable collecting odyssey as a boy. Aged 19, he published The Scottish Coinage, still regarded as an essential source on the subject. He then trained as a banker, before being elected as a Member of Parliament and later serving in the House of Lords.

Over the decades, Lord Stewartby assembled the finest collection of Scottish coins ever put together by a private individual, made up of over 6000 objects. He also cemented his status as one of the world’s leading authorities on Scottish and English medieval coinage, publishing important research and collaborating enthusiastically with fellow numismatists.

The Lord Stewartby Collection was gifted to The Hunterian in 2017.

Image: Lord Stewartby (left) and Sir Kenneth Calman, former Chancellor of the University of Glasgow, at the official handover of the collection to The Hunterian. 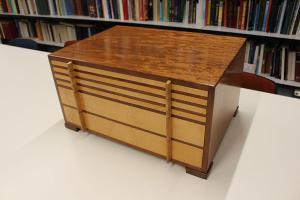 Coin cabinets have been used by numismatists since the 18th century to store and order their collections. Mahogany is the traditional material of choice as it is less acidic (compared to softwoods) and doesn’t ‘off-gas’. Some woods, such as oak, can cause significant damage when gases emitted by the wood react badly with the metals of the coins.

This unique hand-crafted mahogany cabinet, with sycamore drawers and trays, was commissioned by Lady Stewartby for her husband to celebrate their silver wedding anniversary. Lord Stewartby played an active role in its design, reflecting the deeply personal nature of the gift. It was constructed at The Edward Barnsley Workshop in Froxfield, Hampshire, in 1985–86.

The cabinet was used by Lord Stewartby to arrange his coins. The selection would change, depending on what period or subject he was working on. 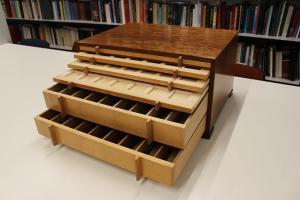 In this sense, it was no mere static cabinet, with coins remaining in an assigned position from the moment they were placed on a tray. Many different denominations from a wide variety of monarchs flowed through its interior.

A Devastating Loss for Scottish Numismatics

The coin cabinet was also a casualty. It was found afterwards in a field, badly damaged. Fortunately the cabinet was brought back to life through a careful restoration. During the process, two bawbees (sixpences) were discovered, one from the reign of James V and the other from Mary Queen of Scots.

However, the burglary resulted in a truly devastating loss for Scottish numismatics. Despite widespread press coverage, numerous appeals and a reward of £50,000 for information leading to the safe return of the coins, none have been recovered. What happened to them remains a mystery. Hopefully one day they will rejoin the rest of The Lord Stewartby Collection at The Hunterian. But in the meantime, anyone with information is urged to contact Police Scotland or Crimestoppers.