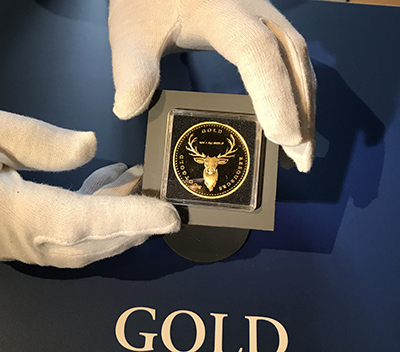 This rare gold round - one of the first produced from commercially mined Scottish gold - is now on display in the Hunterian Museum.

Scottish Gold Round Number 11 was presented to The Hunterian by Graham and Christine Donaldson in February this year. Mr Donaldson is a major shareholder in Scotgold, which produced the gold from its mine near Tyndrum.

12 gold rounds were produced in total and the first 10 were successfully sold at auction in November 2016. Each is stamped with the Scottish Gold Mark of the stag’s head and bears a unique serial number corresponding to a chain of custody system certified by the Edinburgh Assay Office.

Scotgold’s Cononish deposit, from which the first commercially produced gold in Scotland has been mined, is located near Tyndrum, Stirlingshire, in the Loch Lomond and the Trossachs National Park.