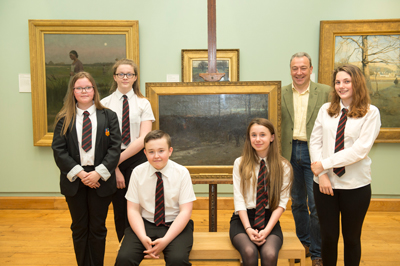 Swapping the playground for paintings, the young poets were invited to the Gallery after writing their own winning poems in response to the James Guthrie painting of 1881, The Gypsy Fires are Burning for Daylight’s Past and Gone. A member of the Glasgow Boys, Guthrie was talented yet had no formal training. Carruth wrote his own poem inspired by the painting for The Hunterian Poems, an anthology featuring responses to a large number of artworks in The Hunterian collections.

Jim explained the commitment of this group of artists to working outdoors, no matter the weather, and 'rustic realism'. Standing as close to the painting as allowed, the pupils learned about what to look for in an artwork they want to write about. Carruth commented that the pupils interpreted the darkness of the images well, with equally dark themes appearing in their poems. Jim shared his original poem from the anthology, The Harvest Wake (2014), reading it to the pupils and Gallery passers-by.

The painting was taken out of storage especially for the visit. Everyone concluded that seeing it in person was something extra special, and that the internet version couldn’t compare. Principal Teacher Gordon Fisher was very impressed with the pupils’ efforts, and we hope they will come back to visit us soon.

Purchase your copy of The Hunterian Poems.