This poetry recital is a rare opportunity to appreciate the works of two leading literary figures. The Chinese poet Yang Lian will read four of his poems, with translations read by his long-term collaborator Brian Holton. These readings will be followed by a conversation on poetic composition and translation.

Yang Lian is a celebrated poet. Having grown up in Beijing, he began writing during his time in the countryside in the 1970s. He gained fame inside and outside China in the early 1980s, being recognized among the so-called “Misty” poets of that era. Since then, Yang Lian has become a highly individual voice in world literature, politics and culture. Yang Lian has published thirteen collections of poems, two collections of prose and one selection of essays in Chinese. His work has been translated into more than twenty languages and he is the recipient of a number of international awards, including the Premio Capri 2014, the NordSud International Prize 2018, and the Janus Pannonius Grand Prize for Poetry 2018. He has been described as "one of the most representative voices of Chinese literature" and "one of the great world poets of our era". Yang Lian was elected a board member of PEN International in 2007, and re-elected in 2011. Yang Lian and the Scottish poet W. N. Herbert together with Brian Holton and Qin Xiaoyu were the co-editors of Jade Ladder (Bloodaxe Books, 2011), an anthology of Chinese poetry 1978–2008. 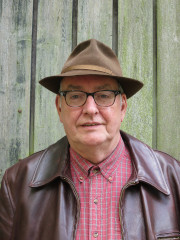 Brian Holton was born in the Scottish Borders and educated at Galashiels Academy, Edinburgh University, and Durham University. He taught classical and modern Chinese language and literature at Edinburgh, Durham, and Newcastle, and Chinese-English translation in Hong Kong: he has also lived in Hangzhou, Ningbo and Beijing, and has appeared at major literary festivals in the UK, Europe and the Far East. He has published translations of a wide range of Chinese poetry and fiction in Scots and English, including his ground-breaking Staunin Ma Lane: Chinese Verse in Scots and English (Shearsman Books). He has translated a dozen books of poetry by Yang Lian, of which the most recent is Narrative Poem (Bloodaxe Books).

The event will be followed by drinks in the atrium.