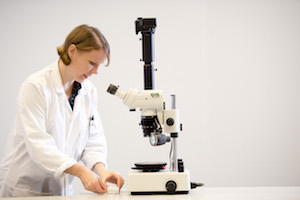 Must Farm is a Bronze Age settlement discovered on the edge of a quarry near Peterborough in 1999. As Susanna Harris, a lecturer in Archaeology explains, the settlement appears to have been abandoned and burned down very suddenly around 900BC. Yet, due to the effects of charring and surrounding soil the settlement was preserved just as it was when the residents left hence, the nickname ‘Britain’s Pompeii.’

The Must Farm Settlement excavation began in 2004 and is an ongoing project organised by Cambridge Archaeological Unit and funded by Historic England and Forterra. Harris first became involved in the Must Farm Settlement excavation in 2014 at the invitation of Mark Knight and David Gibson from the Cambridge Archaeological Unit. As a specialist in organic artefacts from the Neolithic and Bronze Ages, Harris was approached to examine the remarkable range of textiles discovered at the site.

Harris has worked on a variety of sites throughout Europe and Britain, but says Must Farm is unique in Britain. Whilst most British archaeological sites have yielded about 18 fibre and fabric artefacts, around 200 artefacts have been found at Must Farm. These artefacts can be grouped into four categories;

Each of these artefacts represents a stage in the domestic manufacturing process of textiles from the original plant fibres. According to Harris, “The Must Farm excavation is a remarkable opportunity for us to think about daily life in the Bronze Age.” It is not just about what fibres and fabrics have been found but where they were found. For example, most of the fibre bundles were found in one structure, which seems to have been a store in a Bronze Age house. By discovering fibre bundles and processed threads in the home, we have a window into the goings on in a Bronze Age household. 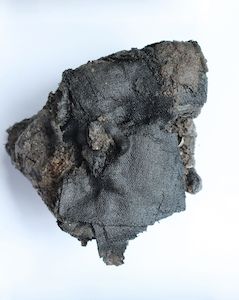 In 2016, a production company called 360 Productions began work on a documentary for the BBC about the Must Farm Settlement excavation called Britain’s Pompeii: A Village Lost in Time. Harris contributed her expertise to the programme by discussing the significance of the fibre and fabric findings at Must Farm. You can find out more about the programme and view clips on the BBC website.

In the future, Harris is keen to develop creative ways of introducing schoolchildren to prehistoric fabrics and fibres. In a world where we are so detached from the processes of making textiles, children could engage with the Must Farm findings to understand how the stem of a plant becomes what they are wearing today. Harris has heard from a range of people who are interested in fibre and ancient crafting technologies. She insists that there is a wonderful tradition of interest in prehistory in the UK and that Britain’s Pompeii was not the first television programme to explore it, nor will it be the last. Harris has found that British people are fascinated about their prehistoric origins and what kind of ancient traditions our culture belongs to, and it is impossible to measure the value of sharing that knowledge.

You can find out more about the ongoing work at the Must Farm website.

For Harris, the next stage is to find new analysis techniques to help her understand the properties of the organic artefacts she is examining. If you are a weaver, a farmer, or you simply have an interest in textiles, fibres and the growing of plants to be used for fibres and processed threads please email us.