Reach 11 - The Scottish Album of the Year Awards 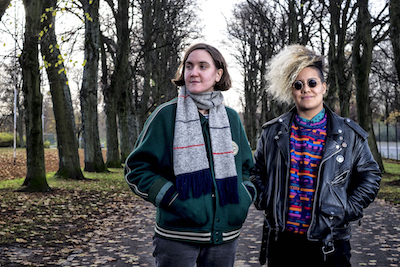 The Scottish Album of the Year Award (SAY Award) was established as a prize for Scottish artists by the Scottish Music Industry Association (SMIA) in 2012. The idea was not only to reward the best Scottish albums annually, but also to promote the innovative, ambitious and exciting music being produced, by Scottish artists across all genres. Previous winners include Young Fathers, Kathryn Joseph and the 2017 winners, Sacred Paws. Whilst plenty of renowned Scottish artists have made the shortlist including CHVRCHES, Primal Scream, and Paolo Nutini, the SAY Award is also integral to generating conversations about new and lesser known artists and championing musical experimentation.

Since the inception of the award, John Williamson, the Lord Kelvin Adam Smith Fellow in Popular Music Studies, has chaired the judging panel. Williamson is a music industry veteran who has worked as a music journalist, gig organiser, and band manager, including a stint managing Scottish indie-music heavyweights Belle and Sebastian. He was also a judge on the Mercury Music Prize panel for three years. After taking up a full-time academic post in 2012, he seemed like a natural choice to chair the SAY Award judging panel.

The SAY Award is funded largely by Creative Scotland and Williamson says that they have been a very supportive partner over the past five years. The SMIA understand that the amounts of funding for artists from record labels in particular has shrunk considerably often making it harder for artists to create and promote new music. The SAY Award aims to help raise the public profile of nominated artists by featuring twenty albums on a longlist, which is narrowed to a shortlist of ten before a winner is chosen at a high profile awards ceremony each June.

One of the most radical aspects of the Award is that it not only awards a substantial cash prize of £20,000 to the winner but also a further £1000 to all of the artists whose albums are shortlisted with no conditions attached. Williamson says that means that artists can choose to use the money to produce their next album, to subsidise touring or simply to pay off debts, whatever they want.

In that respect, the SAY Awards provide a crucial counter-balance in an era in which streaming services reign supreme and making a career in music is becoming less and less financially viable. Williamson criticises those who approach artists’ ability to create music like a business plan, ‘You can’t really do business plans for music,’ he insists, ‘but you’re still expected to present these when really it’s a guess at best.’ He believes that the support of Creative Scotland, who do not expect to be able to measure artistic and creative outcomes makes the award even more appealing for the nominated artists.

Williamson’s main role as the chair of the panel is to ensure that the two judging meetings (to choose the shortlist, and later, to choose the winner) produce an outcome under often severe pressure of time. This involves getting eleven other judges from varying backgrounds and with different tastes to agree on a clear winner out of twenty albums, some of which are simply incomparable.

“One of the best things about the judging process”, Williamson says, “is that is just a great opportunity to have a discussion about music. And every year, regardless of who is on the panel, it is great to hear how passionate people are, both about what they like and what they don’t. The difficult part of chairing is not getting the judges to make their views known, but to reach a decision. And preferably one that, even if their favourite doesn’t win, the individual judges are comfortable with the fairness of the process”.

Ultimately, Williamson thinks the SAY Award is a platform to both celebrate Scottish music and raise the profile of the chosen artists by introducing the public to a vibrant and diverse range of new Scottish music. That the award still focuses on the album could be seen as a legacy of a different era in music-making, but Williamson sees the SAY Award as one small but significant way of helping to make music a more sustainable career - at least for those fortunate enough to have won the prize over the last six years.

You can find out more about the SAY Award on the SAY website.

If you would like to find out more, or if you are interested in working with an academic from Music please email us.