Reach 11 - Exploring the possibilities of the Cross-Genre Essay 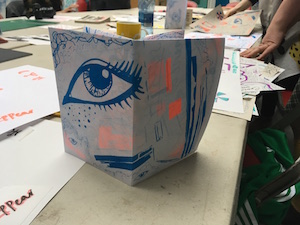 Elizabeth Reeder is a lecturer in English Literature at the University of Glasgow, but first and foremost she is a writer: ‘that’s what I love to do’. Reeder wants to turn our attention to the literary and cross-genre essay, a form that allows us to explore and communicate important things in unique ways.

According to Reeder, one of the best examples is Claudia Rankine’s Citizen: An American Lyric (Graywolf, 2014) in which Rankine layered her commentary on complicated subjects including racism, the black body, violence, and depression through embedded and innovative use of image and text. Writers like Rankine utilise the cross-genre essay to express their thoughts on subjects and themes which can be difficult to convey whilst retaining their complexity. Reeder argues that the experimentation with form also allows writers to reach new audiences and encourages their existing audiences to re-evaluate their consideration of the world. In the current climate of political and cultural turmoil, the cross-genre essay can do what the academic essay might not: elicit a strong emotional response from readers, and produce new ways of acquiring and reacting to knowledge. In 2016 in partnership with the Royal Society of Edinburgh, Reeder organised a series of Genre-Bending Essay Workshops and events, designed for both more established writers and writers aged 16-25.

The first workshop was held on the 27th April at the Scottish Poetry Library in Edinburgh. It considered experimentation with form, medium and genre when tackling writing about important and difficult subjects. The workshop was led by Reeder, the singer, songwriter and writer Karine Polwart, and the artist and writer Amanda Thomson.

The day was rounded off by a sold-out evening event where Elizabeth Reeder, Karine Polwart and author and editor Max Porter discussed politics, art-making and storytelling. The second workshop, Genre-Bending Essaying: Hybrid Writing as a Catalyst for Change, was held at the Centre for Contemporary Arts (CCA) in Glasgow on the 11th June, focusing on generative editorial processes. It was run in conjunction with MAP magazine with contributions Laura Edbrook and Alice Bain, the dramaturg and writer Ruth Little, and featured a free evening event including readings by workshop participants as well as by the poet and essayist Richard Price. 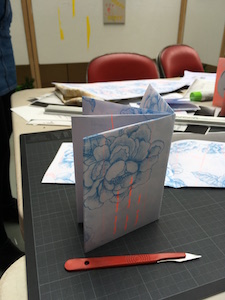 Two further workshops were held at Out of the Blue, Edinburgh on the 4th and 9th June aimed at writers aged 16-25. Contributors included the poet and activist Nadia Aisha, Johnny Gailey from Out of the Blue, and Laura Jones and Heather McDaid of 404 Ink/ Nasty Women. Amanda Thomson also led an artist’s book-making workshop at Out of the Blueprint studios to help the young artists think about how their readers physically navigate the page. In addition to offering creative inspiration, Reeder felt that they had a duty of care to younger writers, and so in September Claire Heuchan led a workshop designed to equip younger writers with the tools to deal with negative or hostile responses to their writing. Reeder sees herself as a catalyst and hopes that attending the essay workshops has encouraged the writers to be more experimental in their communication with the world. Jemma Neville, an attendee at one of the essay workshops, commented: “The essay workshops gave me the confidence to experiment with mixing genres within a piece and the discipline to prepare and perform new work. The workshops came at exactly the right time for me at the start of a creative writing sabbatical and being free, cost was not a barrier. The guest contributors were all excellent in their use of cross-art form activities- for example analysing the structure of song lyrics, making artist picture books and considering indexing of words. I am still in touch with many of the other participants who have been supportive and generous with critical feedback and reading recommendations.”

The eventual outcome of the project will be a publication of cross-genre essays, which is a collaboration between Reeder and MAP Magazine – due out in Spring 2018. In the meantime, Reeder hopes that the artists have been given the tools and the confidence to produce powerful and different writing about the subjects which matter the most to them.

You can find out more about the essay workshops on Reeder’s website.

If you want to find out more about collaborating with a creative writer or an academic from English Literature, please drop us an email.