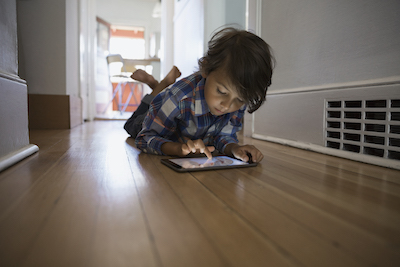 Lynn Whitaker, a lecturer in Cultural Studies and Cultural Policy, was horrified when she analysed complaints about in-app purchasing in children’s games. One child had managed to spend £4500 in a single week whilst playing an online game accessed via his mother’s social media account. Whitaker insists that whilst this might seem like an extreme example, exploitative practices are built into the design of these supposedly ‘free-to-play’ games which are aimed directly at children.

The issue was first brought to Whitaker’s attention when she was invited to a stakeholders’ meeting at the Office of Fair Trading (OFT) (whose role has now been superseded by the Competition and Markets Authority (CMA)). The OFT explained that they had been investigating online children’s apps and games in which children were running up enormous bills. They had been using complaints data quantitatively as part of that mission, but it wasn’t their remit to look at the circumstances or context of that spending. Whitaker offered to do some qualitative research with that complaints data.

Whitaker found that the complaints exposed a fairly typical experience for parents whose children are playing these games. Typically the tipping point at which a parent decided to make a complaint to the OFT was when their child had spent around £100. That might seem relatively rare, but Whitaker discovered that children could easily pay the maximum of £69.99 for a bundle of content multiple times within one game. Furthermore, whilst parents generally prefer their children to play free games that is exactly where their children are most vulnerable because there needs to be some means of monetising that content.

Monetisation models used in free games can be incredibly exploitative and manipulative. In one children’s game in particular, the player was given a free pet. If the child cancelled their subscription to the game, then the pet would begin to wither and die and then follow the child’s in-game character around the virtual world as a skeleton. This type of practice is “so clearly exploitative,” says Whitaker. Another trick is what is known as a ‘grudge purchase’ meaning that the child pays for what’s offered even though they don’t want it because the advert prevents them from continuing to play.

The OFT showed their determination to tackle these exploitative practices aimed at children by creating principles which software developers and, perhaps more importantly, platform providers have to abide by. Yet, there have not been many prosecutions brought on the full range of what Whitaker sees as malpractices involved. So far, there have only been a few narrowly defined cases brought which pertain to the contravention of advertising standards and regulation – not the level of manipulation involved in monetisation models.

Whitaker points out that most of the time the gamedevelopers and the platform providers are able to wriggle their way out of culpability by claiming that either their game is not aimed at children, or that the platform is age-restricted. But, when these games feature fairies, cute animals and bright colours, it’s easy to see who the target audience really is. However, Whitaker mentions that anecdotal evidence has led her to believe that those actually producing content for children’s media, like online apps and games, are committed to producing high quality ethical content and they do not want to exploit children. They say that it is the platform providers who are pressuring them to design games which fit a certain monetisation model.

Rather than placing responsibility with parents to educate their children about the potential pitfalls of the games they like to play, Whitaker believes the onus should be on the software developers and platform providers to adhere to the OFT principles. She urges parents (“It doesn’t matter if you think it was only 99p that was exploited from your child”)to complain to the CMA, who are now responsible for all legislation and watchdog activity regarding these games.

The regulations designed to protect children within online games are there, she says, but cases are not being brought often enough. Whitaker urges people to realise that you can get your money back if your child spends money in a game without your permission. Government institutions like the CMA can help because they understand when these games are designed to manipulate money from your child.

The next stage for Whitaker is to further her investigations into how the software development companies creating these games feel about the exploitative practices built into games aimed at children. For the time being, Whitaker would still like to hear from you if you have ever had a similar experience with children’s in-app purchasing and it does not have to be an extreme example.

If you would like to find out more about Whitaker’s project or if you’ve had a similar experience, please email us.