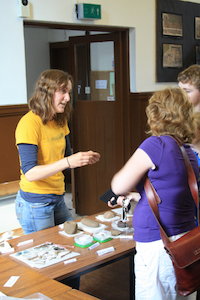 The Strathearn Environs and Royal Forteviot project, or SERF, began in 2006 when three archaeologists decided to pursue their overlapping research interests in this landscape in Perthshire. Professor Steve Driscoll, Dr Kenny Brophy and Dr Gordon Noble, who was a post-doctoral fellow at the time, were fascinated by the landscape of Strathearn and its archaeological significance in both early prehistory and the medieval era. Forteviot is full of early pre-historic ritual monuments, Pictish carvings, and Kenneth MacAlpin,one of the first Kings of a united Scotland, was said to have died at the ‘palace’ at Forteviot in AD 858. So, one of the key questions is what is so special about this landscape that people came back to use it again and again?

The SERF investigations are split over two sites in the landscape. Firstly, the core excavation and research site is Forteviot. Secondly, SERF is investigating the large concentration of hillforts located along the eastern stretch of Strathearn. The project later expanded into the neighbouring parishes of Dunning and Forgandenny. In 2009 Dr Tessa Poller the Research Support Officer in Archaeology came on board as the project co-ordinator for the SERF Hillforts Programme.

The team initially envisioned SERF as a ten-year project which could encompass excavations, training opportunities for archaeology students and a wider collaboration with the wider Perthshire community. At the outset, the team approached Historic Scotland (now Historic Environment Scotland, or HES) who signed up to help fund a review of preservation and archaeological training. In return, HES gain valuable information to help shape their environmental management policy in Strathearn. Later, the Royal Commission on Ancient and Historic Monuments (also now part of HES) came on board with SERF to help the archaeologists to enhance their data collection, presentation and online resources.

In terms of providing archaeological training, Poller and the rest of the SERF team were keen to widen the net, so to speak. International archaeology students travelled to Perthshire for training in a Scottish environment. Some students were fortunate enough to be part of the excavation of an untouched Bronze Age burial. After lifting an enormous capstone covering the burial site, which hadn’t been lifted in around 2000 years, the team was amazed to find the organic remains of a bundle of flowers. Furthermore, the team discovered a dagger with a pommel made from a sperm whale’s tooth. The enigmatic and unpredictable nature of the monuments and artefacts excavated in Strathearn was exciting not just for the archaeologists involved, but for members of the local community.

SERF also reached out to Perth and Kinross Heritage Trust who have helped to encourage local volunteers to participate in the project and its excavations and to pass on the knowledge to the wider public. The Perthshire Museum and Art Gallery also took an interest in the SERF investigations. Poller says that these relationships developed over a ten-year period and as SERF gained more public recognition more local societies became involved and engagement with the community blossomed.

Dr Rebecca Jones, Head of Archaeology and World Heritage at HES, said “The community engagement conducted by SERF has been extremely valuable for raising the profile of designated sites. We have just started a pilot project reviewing Scheduled Monuments known through crop-marks, and the pilot has been designed so that the SERF study area sits within it to provide recent excavation and testing of such remains. These will help determine whether our designations are fit for purpose. The SERF project embodies much of the spirit of Scotland’s Archaeology Strategy, as it provides opportunities for local volunteers and students to learn about their past and help to tell Scotland’s stories – so it’s been a great initiative to be part of.”

Poller says that one of the most rewarding aspects of being involved in SERF is the relationships she has developed with the public. Over the ten-year project SERF has helped to provide residents not only an opportunity to attract tourism, but a better sense of their own place and heritage. The community groups are the ones who will keep the spirit of the SERF project going. So, the team are now in discussion over the best means of passing the torch on to the community groups.

You can also explore the new digital resource for the hillforts website.