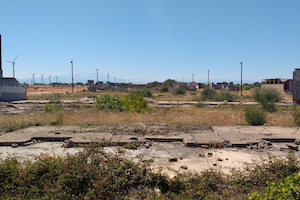 Dr Benjamin Thomas White, a lecturer in History, began to recognise parallels between the experiences and issues facing the refugees who have fled Syria since the outbreak of civil war in 2011 and that of other refugee communities and stateless peoples in his historical research. White argues that knowledge of that historical context is useful for humanitarian groups working with refugees in camps and here in Scotland today. So, following his move to Glasgow, White made immediate contact with the Glasgow Refugee Asylum and Migration Network (GRAMNet), and through GRAMNet he contacted the Scottish Refugee Council (SRC).

White's aim was to prioritise refugee voices themselves to not only assist the agencies operating refugee camps, but to develop a richer, more qualitative and historical understanding of the refugee experience in Scotland. Usually, data on refugees is collected by the very states who wish to control and immobilise them through the camps. Alternatively, that data might be collected by the humanitarian agencies who often acquiesce to the states’ wishes because they see that as a more efficient way to distribute food and aid. So, White became involved in several projects to further those aims.

In June 2016 White organised a workshop entitled ‘Child Refugees, past and present,’ which was held at the Centre for Contemporary Arts (CCA) in Glasgow. White’s objective was to create opportunities for longer-term collaboration between academics and practitioners. The workshop and event was attended by representatives from organisations such as the British Red Cross, Migrant and Refugee Children’s Legal Unit, the Scottish Guardianship Service and the Scottish Refugee Council (SRC).

Following the child refugees event White was approached by Edinburgh International Film Festival to speak in a post-show discussion with the director of the documentary ‘Twice Upon a Time.’ You can read more about the documentary here.

The SRC then asked for White’s assistance in developing a timeline of refugees in Scotland which was used as a visual display in events during the Refugee Festival Scotland held on the 14-26th June 2016.

Subsequently, the SRC launched a pilot event with the objective of listening to more refugee voices. That event included researchers like White, council members and refugees currently using the support services available in Glasgow. That initial meeting led to a funded project on humans and animals in refugee camps. The project was funded by the Wellcome Trust and involved practitioner partners from Vets Without Borders and the UNHCR’s policy development and evaluation service. Part of the humans and animals project involved a strand of six meetings at the SRC with a reference group of refugees.

Partially because of those meetings, the SRC discovered that refugees generally only tend to be asked about refugees. However, they also tended to have strong opinions on the Independence Referendum, for example. It transpired that nobody had asked them much about their experiences of things like resettlement, integration or raising their children in Scotland. So, White is seeking funding for a studentshipincollaboration with the SRC and Glasgow Life, which would involve collecting oral history interviews about refugee life in Scotland from 1985-2015.

The refugee community in Glasgow is growing. Around 10% of UK asylum seekers have come through Glasgow, which has lots of local support networks, such as Maryhill Integration Network and the Scottish Refugee Council (SRC). Glasgow has also been accepting Syrian refugees through the Vulnerable Persons Relocation Scheme (VPRS). Despite Scotland amounting for just 10% of the UK population, roughly 40% of the Syrian refugees who have arrived in the UK through the VPRS during its first year have been relocated to 29 of Scotland’s 31 local authorities.

Therefore, White’s goal is to help to provide the SRC and policymakers with a better understanding of the longer-term refugee integration process to inform future policy and practice. Secondly, White hopes to encourage local authorities, academics and practitioners to listen to refugee voices. That involves empowering refugees and helping them to contextualise their journey through the asylum system, which is an extremely unpleasant and isolating experience. Furthermore, White hopes that the refugee participants involved in the SRC project on humans and animals in the refugee camp will become trained to conduct this type of research themselves.

If you would like to find out more about either of the ongoing refugee projects, or if you have personal experience of the refugee camp and the asylum system in the UK, please contact us at arts-ke@glasgow.ac.uk