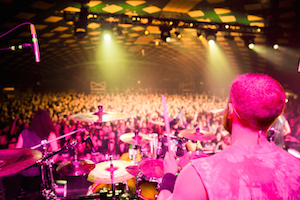 Professor of Popular Music Politics, Martin Cloonan, is one of the co-investigators on the UK Live Music Census. Cloonan joins Dr Matt Brennan from the University of Edinburgh, Dr Adam Behr from Newcastle University and research associate Dr Emma Webster. The music industry, Cloonan argues, is not a singular entity, but rather a web of interconnected industries including; recording, live music, and publishing. In Scotland, the live music industry has outstripped the value of the other sectors for some time now.

The project’s main partners include UK Music, Music Venue Trust, and Musicians’ Union (MU), as well as organisations such as Help Musicians UK, Attitude is Everything and Julie’s Bicycle. These partners from the music industry have worked with the researcher to agree the census’s methodology. Ultimately, Cloonan envisages the methodology and the eventual census results as giving the live sector some of the tools it needs to talk to government about the issues which live music venues are facing.

So, the UK Live Music Census aimed to tackle that issue directly using two methods. The first method involved the snapshot censuses, which took place on the 9th March 2017. Teams across the country tried to map all the live music activity taking place in British cities over a 24-hour period. From 12pm until 12pm the following day volunteers collected data on performances and audience demographics at musical performances ranging from pub gigs and karaoke nights, to named DJ sets and arena concerts. The censuses took place in Glasgow, Newcastle, Oxford, Leeds, Southampton and Brighton.

The team of volunteers in Glasgow recorded information from approximately forty venues across the city, and Cloonan himself attended eight events. The volunteers included some of Cloonan’s postgraduate students, and students from four other institutions. Visiting Researcher Gabrielle Kielich volunteered in Glasgow, she said:

I attended a metal concert, an open mic night and a DJ session. It was fascinating to speak to a wide demographic attending so many kinds of events across a range of genres and venues on the same night — it really gave a better sense of how much live music is available and how well it is attended. I think the Census will be influential by offering concrete data that can demonstrate the extent of the cultural and economic significance of live music, and for how it can serve as a research model for conducting similar studies in other cities.

The second method involved asking audience members, musicians, promoters and venues to complete an online survey, which was open until the 31st May 2017. The results of this part of the census will be measured over the summer.

Channel 4 News reported on the census on the 9th March. As the report described, noise complaints, licensing restrictions and business rates are leading to hard times and even closure for live music venues. However, Cloonan hopes that the toolkit which the team designed can now be used by other cities to measure the value of their live music economy and hopefully protect the industry for future generations of music lovers.

To find out more about the UK Live Music Census visit the website.

If you’d like to find out more about the UK Live Music Census, or if you’d like to work with an academic from Music you can contact us at arts-ke@glasgow.ac.uk.