Reach 09 - Reflecting on Shestov: Designing a retrospective exhibition of the philosopher’s life 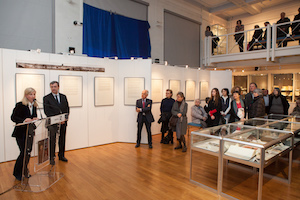 In 1886 Lev Shestov was born into a Jewish family in Kiev, in what was then known as Russia. He later emigrated to France in 1921 following the October Revolution. It was during his years in Paris that Shestov established himself as a writer and scholar renowned for approaching literary topics from the perspective of an existential philosopher. Dr Ramona Fotiade, a Senior Lecturer in French, has been fascinated by the life and work of Shestov since she was studying for her PhD. She believes that the work of existential philosophers is significant to modern life because we still live in a world rife with violence, instability and fear. To counter these threats to our sense of security, Shestov tackled questions including the meaning of existence, reason, tolerance and faith, which is why Fotiade thinks that his work should be as widely recognised as French philosophers like Jean Paul Sartre and Albert Camus.

Until recently, many of his works had been out of print for years, and his manuscript correspondence and early drafts of his books remained unpublished in the Shestov Archive in the library of the Sorbonne University in Paris. The relative lack of public and scholarly awareness of Shestov is what motivated Fotiade to found the Lev Shestov Society at the University of Glasgow in 1996. The following year the society published the first issue of the Shestov Journal, which publishes articles in English and French. Encouragingly, the society and journal have stirred up a great deal of interest in the life and works of Shestov. For instance, the society have been contacted by American publishers interested in reprinting Shestov’s work, a series of journalists from around the world seeking accompanying images for articles, and a whole range of curious young academics from France, Germany, Italy, U.K., U.S. and Israel.

Despite this flurry of interest in Shestov, Fotiade still felt that there was a need to tap into the wider public consciousness. So she began to explore the possibility of hosting an exhibition of his books and manuscripts, and where better to host such an exhibition than in Paris. From there, Lev Shestov (1866-1938) The Thought from Outside, a retrospective exhibition was born, celebrating the 150th anniversary of Shestov’s birth. The exhibition was held at Mairie du 6e in Paris from the 23rd March to the 9th April 2016.

To bring the exhibition to life, Fotiade collaborated closely with Isabelle Diry and Jacqueline Artier from the manuscript department at the Sorbonne to deal with all of the practicalities involved in handling delicate archival materials, such as deciding which documents were fit for display, how to transport them and how they should be presented. They also helped Fotiade to locate the whole of Shestov’s personal library which had become scattered throughout the Sorbonne repository.

To accompany the exhibition, Fotiade secured further funding to create a short documentary film. This project began in Glasgow with the help of Matthew Cowan from Attic Productions, and was then furthered by the Passager French film company in Paris.

The comments in exhibition’s visitor book had a resoundingly clear message: ‘we want more Shestov!’ Since the exhibition the society has been contacted by readers from Italy, Poland, Holland, Germany and Russia, wanting to know how they could read more about the man and his philosophy. As the response to the exhibition has shown, Shestov has meant and means different things to different people. To some he was a rebellious figure, a pillar of the arts, to others he was important as a Jewish thinker, whereas to others he was significant as a religious philosopher.

The publicity from the exhibit has also led to some interesting partnerships for the society. In June of 2016, the society was contacted by Christie’s auction house in London who requested their assistance in the auction of Russian art, featuring a portrait of Shestov which was painted in 1921. During a recent performance of Chekhov’s Ivanov in Paris, the director Luc Bondy sought permission to have Shestov’s essay on the play printed and distributed in the program to accompany the performance.

Ultimately, Fotiade would like to see more engagement with the life and philosophy of Shestov internationally. There are currently a number of translations into European languages, and a very early Japanese translation, but she would like to see Shestov translated into Chinese and other Asian languages in the future. Another step would be to incorporate Shestov’s teachings into the French philosophy curriculum. For Fotiade, the positive responses to the exhibit merely proved what she already believed, that Shestov’s enduring appeal comes from his ability to deliver a more personal, relatable message through existential philosophy. The retrospective exhibition has helped to bring her one step closer to her aim of raising the profile of Shestov as one of the acknowledged figures in contemporary philosophy.

If you’d like to find out more about this project, or if you’d like to develop or support a project with an academic from the School of Modern Languages and Cultures, please contact us at arts-ke@glasgow.ac.uk