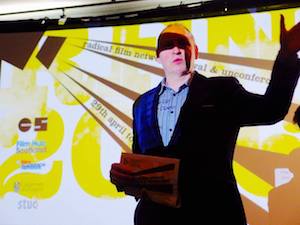 The Radical Film Network (RFN) Festival and Unconference were held at Glasgow University and in venues across the city from the 29th April – 2nd May 2016. Glasgow seemed like the perfect host for a radical film event. It is a city which prides itself in its own radical heritage, it has a vibrant alternative film culture, and, in the wake of the 2014 Independence Referendum, a feverish spirit of voluntarism. Having lived in Glasgow for most of his life, David Archibald, Senior Lecturer in Film and Television Studies, is more than familiar with the city’s community and political networks, third sector organisations and trade unions. Keen to link these organisations to the city’s vibrant grassroots film culture, for Archibald, the RFN presented the perfect opportunity for this to be done.

The RFN was founded in 2013 with the intention of building an international network of film academics, socially engaged activists and filmmakers. Since then the organisation has grown to include over one hundred organisations across four continents all dedicated to supporting the ‘development, growth and sustainability’ of radical film culture. The network held its inaugural conference in 2015 and when organisers were looking for a city to host the 2016 conference, Archibald proposed Glasgow. He was keen, however, to break down the barriers between academics, activists and filmmakers so the Glasgow event was different in two ways. A traditional academic-style conference didn’t really fit with the ethos of RFN, and so the ‘Unconference’ was born. The unconference dispensed with some of the hierarchies of the academic conference, creating a more welcoming space for non-academics to inhabit. Alongside the unconference a film festival was organised. Initially this was envisaged as being a smallish affair with about eight to ten events; however, as word got out about what was taking place it mushroomed.

A series of monthly organising meetings to plan the event were held at the University. Archibald acted as overall co-ordinator with Maria Velez-Serna (formerly of the University of Glasgow now at the University of Stirling) as the unconference co-ordinator and Fran Higson, the festival’s programme co-ordinator. Archibald stresses, however, that the success of the festival can be attributed to the collective effort of scores of individuals and organisations. From venues such as the Glasgow Film Theatre, Glasgow Women’s Library and the Scottish Trade Union Congress, to sister festivals like the Glasgow Short Film Festival and Africa in Motion Film Festival. The festival, which was funded by Film Hub Scotland and Creative Scotland, showcased the best of radical film culture in thirty four different events which were attended by over 2000 people.

Overall, Archibald was proud to have been involved in a festival which presented an alternative vision of film culture in Scotland, one which showcased multicultural grassroots filmmaking. The RFN made a concerted effort to push the events away from Glasgow University itself, located in the city’s leafy and affluent West End, and into the heart of the Gorbals and Govan where there is a vibrant film community developing.
The festival continuously pushed boundaries in terms of diversity and meaningful public impact. The sheer range of different events on offer was impressive, from celebrating queer cinema, the lives of minority ethnic women to historical radicals such as Ethel MacDonald. There was also a political undercurrent from a film exploring reclaiming land and collective futures, to short films made by trade unionists and a documentary on the run-up to the march for International Women’s Day in Bridgeton in 2015. In terms of generating wider social impact, collaborations with Flourish House mental health charity and the Scottish Mental Health Arts Film Festival led to the ‘Let Glasgow Flourish House Party.’ Throughout the weekend’s various events, the radical agenda was the beating heart of the festival.

As for filmmakers themselves, the festival allowed them to reach and engage with a wider public and academic audience. First of all, the premise challenged perceptions of film and Scottish film culture and pulled away from the dominance of the mainstream film industry. Instead, the RFN shone a spotlight on the work of local, grassroots filmmakers such as Basharat Khan, Carla Novi and Garry Fraser. Glasgow punters (and the odd character!) invited the public into their homes for screenings as part of the Radical Home Cinema Event, which provided an imaginative way to bridge the divide between audiences, filmmakers and the creative process. Similarly, the discussions with academics allowed filmmakers to engage with film discourse and receive feedback from a sympathetic, but not uncritical audience. Many of these academics are involved in research in the newer subsection of film studies which focuses on film festivals themselves. The event was spectacular success, surpassing the wildest expectations of the organisers. An impressive short documentary about the event captures some of the events character. It is available to view here: https://vimeo.com/169373887
What’s the future for the radical Film Network in Scotland? Archibald says that they are taking stock but advises that there’s likely to be more to follow in the future. Watch this space.

If you’d like to find out more about the festival, or would like to develop a project or support one with a Film and Television academic please contact us at arts-ke@glasgow.ac.uk.