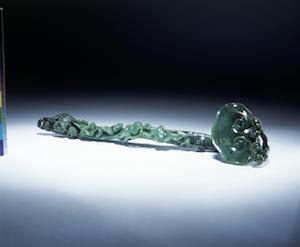 Have you ever found yourself standing before a beautiful work of Chinese art, admiring its colours, tones and textures, with your feet are firmly planted in the UK? If you’ve visited the Burrell Collection, the National Museum of Scotland, or the Victoria and Albert Museum in London, it’s highly likely. If so, did you pause for thought to consider how it got there? The origins of the Chinese art in Western collections are often obscure, but museums and galleries are now beginning to investigate the provenance of their Asian collections.

Before he joined the University of Glasgow, Professor Nick Pearce was a curator of East Asian Art at the Victoria and Albert Museum in London, and the Burrell Collection in Glasgow. Following his appointment as the Richmond Chair of Fine Arts, Pearce’s expertise and reputation as a Chinese art specialist have led to a number of exciting collaborations with museums and galleries nationally and internationally, with a particular interest in provenance.

According to Pearce: Provenance helps place an object within the history of collecting and helps track the movement of artefacts of all kinds and from all cultures and point up the circumstances of that movement. In terms of China, many of these objects were collected at a time when the country was politically and economically weak during the 19th and 20th centuries, so understanding this imbalance is important. In 2003 the first provenance investigation, funded by the AHRC, tested whether provenance research could be undertaken with Chinese art, with the Burrell Collection acting as a case study. Fortunately, Burrell kept meticulous notes on all of his acquisitions, and so it was possible to trace some of the artworks all the way back to the source country, China, during the 1920s. By the end of the eighteen month long project the findings were compiled into an online database known as the Chinese Art Research into Provenance or CARP. This led to an invitation in 2014 for Pearce to join the Freer-Sackler Galleries, which make up the Smithsonian National Museums of Asian Art in Washington D.C., as a fellow on their provenance project. Jane Milosch, Director of the Smithsonian Provenance Research Initiative, said that:

'Professor Pearce’s deep knowledge of the history of collecting and Chinese art has been invaluable to the recently-launched Asian Art Provenance Connections Project at the Freer|Sackler Galleries. His CARP project informed the methodology of the F|S project, and is leading the way to advances in digital technology for provenance research. As the Smithsonian Provenance Research Initiative’s first Fellow, generously funded by the David Berg Foundation, Professor Pearce has been instrumental to the development of new collaborations with the Smithsonian Institution, including the German/ American Provenance Research Exchange Program for Museum professionals, 2017-2019, and ultimately, to a more comprehensive partnership between the Smithsonian Institution and the University of Glasgow.'

Pearce’s role was initially to investigate the collectors’ biographies, archives and other forms of open data regarding the history of the artefacts. This research underpinned the Freer-Sackler provenance database on the Smithsonian’s website. Pearce’s contribution also helped the institution to fulfil one of its duties to the public, because, ‘it engaged with a core responsibility of the Smithsonian to be transparent about the way they have acquired objects, and the history of those objects.’ This is now a priority for many museums, as is engaging with their collections in the public domain. Building upon the success of his partnership with Freer-Sackler, Pearce has continued to engage with other museums across the United States and Europe. One of his aims for the future is to roll out the provenance methodology internationally so that museums and galleries are able to enhance their exhibits by sharing the provenance stories of Asian art collections. For instance, in October 2016 Pearce visited the technical partners on the Freer-Sackler project at the Carnegie Museum in Pittsburgh. Subsequently, Pearce plans to travel to New York to advise the curators at the Cooper Hewitt, Smithsonian Design Museum on uncovering the provenance of artefacts in their decorative art collection.

Additionally, Pearce has been involved in developing a new Art History MSc in Collecting and Provenance in an International Context at the University of Glasgow, involving colleagues in Criminology as well as Arts. Provenance work is also having an impact on auction houses. There is currently a debate over the legality of art ownership, particularly regarding the restitution of art which was stolen in the past. Art historians, like Pearce, can offer advice on issues of provenance which can arise when artefacts with dubious histories are auctioned. Where this relatively new field is going and how it will continue to have an impact in the future is unsure, but Pearce feels very enthusiastic because, as he said, ‘I just love doing this sort of work.’

If you’d like to find out more about the provenance project, or if you’d like to develop or support a project with an academic from History of Art please contact us at arts-ke@glasgow.ac.uk.