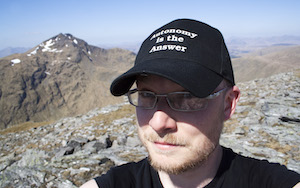 That may sound like a strange question, but death is nonetheless  an important part of all of our lives which we don’t like to talk  about. Perhaps we don’t even know how. Ben Colburn, a Senior  Lecturer in Philosophy at the University of Glasgow thinks we are  failing as a society to really engage with what he calls the  ‘circumstances of a good death.’ Think about it, dying has become  a medicalised process in which, Colburn argues, we disempower,  dehumanize and institutionalise people towards the end of their  life. That doesn’t have to be the only way we approach death, and  Colburn believes that we should be trying to ensure that we  protect the autonomy of people who are thinking about their    death.

Colburn has been working on the relationship between our autonomy and the notion of ‘dying well’ for a number of years. So when he saw an article in the Guardian discussing the work of the charity Living Well, Dying Well he reached out to them. The charity focuses on a pioneering new approach to end of life care in which they train ‘doulas,’ who are typically associated with a more holistic style of midwifery. Except that a death doula is responsible for giving support to a dying person and their social network, as opposed to an expectant mother and newborn.

Hermione Eliot, the director of Living Well, Dying Well, was eager to find ways of collaborating with Colburn, and so they invited him to become a guest blogger in early 2016. To begin with, the charity asked for his feedback as a philosopher on their approach to training doulas. Colburn might not think that this is the only alternative approach to dying, but he appreciated that the doula approach was instinctive, humane and different enough that we should try it.

Ultimately, Colburn envisages a role for political philosophers in offering advice to organisations dealing with end of life cases, and eventually to help to shape policy change. However, he recognises that a philosopher’s impact can be positive even if it doesn’t result in grand societal change. Following the collaboration with Living Well, Dying Well Colburn became involved in the Glasgow End of Life Studies Group, an interdisciplinary group based at the University’s Dumfries campus.‌

That led him to embark on a new collaboration with the Prince and Princess of Wales hospice in Glasgow. The hospice specialises in end of life care, but the patients are still encouraged to learn new ways of expressing themselves – through art. Artists-in-residence at the hospice are running art classes for the terminally ill and their families, which allows the patients to explore their creativity. This empowering approach has proven hugely beneficial for the patients and their loved ones during such a traumatic time. In one instance the grandchildren of an octogenarian told of how much it had meant to them to see their grandfather have the opportunity to develop his interest in painting so late in life.

What Colburn is offering the Prince and Princess Hospice is a way of articulating the underlying principles to explain their art practice. Colburn claims that this type of approach is so unusual and positive for the dying person because it allows them to continue the process of self-development even when they know they are approaching the end of life. This gives the person a degree of self-control and autonomy which their medical circumstances might have taken from them in other areas of life.

The next stage for this collaboration is for Colburn to attend meetings with the artists-in-residence every couple of months to help them to further develop their approach and retain the empowering elements which are so valuable. He will also be philosophically consulting on the way they have implemented and plan to act on new ideas, to help the staff understand why their work has had such a positive effect. Here’s what artists-in-residence Kirsty and Jeni had to say about working with Colburn:

‘The time we spent with Ben felt like a real opportunity to deepen our knowledge and understanding of how our practice as artists working with patients at the hospice relates to philosophical concepts of autonomy. The sessions have been challenging, supportive and practical.’

Although both of these collaborations are still in their infancy, Colburn feels optimistic about the unique and more humane approaches to end of life which these organisations have pioneered. He hopes that as a philosopher he can critically analyse these approaches, write about them and recommend the models to other organisations in the future. Whether they are the best approach or not, these innovative new approaches should help to inspire conversations about what it really means to ‘die well.’

If you’d like to find out more about this project, or if you’d like to develop or support a project with an academic in Philosophy, please contact us at arts-ke@glasgow.ac.uk