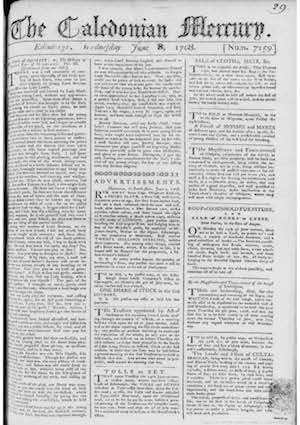 In 1752 an enslaved teenager named Jamie was brought from Virginia to Beith in Ayrshire, where he was trained as a joiner. Then in 1756 Jamie’s master decided to send him back to Virginia and sell him, at which point the young man escaped to Edinburgh where he found work as a journeyman carpenter, before being captured and imprisoned. Jamie’s story raises some significant questions: was he exceptional, or were there other enslaved people in Britain who chose to escape, and why would he and others choose to pursue a life in Britain rather than a return to their families and communities in North America and the Caribbean? As Professor Simon Newman has discovered, there were a significant number of enslaved people in eighteenth-century Britain, and a good many of these did try to escape and seek out new lives for themselves.

The Leverhulme Trust has funded a large scale research project entitled ‘Runaway Slaves in Britain: bondage, freedom and race in the eighteenth century,’ which aims to enhance our understanding of those who escaped bondage in the British Isles prior to the legal ending of slavery. Newman is joined by two co-researchers, post-doctoral research Dr Stephen Mullen, and postgraduate research assistant Nelson Mundell. When Jamie escaped, his master placed advertisements describing the runaway and seeking his return in both Glasgow and Edinburgh newspapers, and other slave owners routinely did the same thing. The first stage of this project has involved a great deal of research in the newspaper archives of Edinburgh, Glasgow and Liverpool, to locate, transcribe and photograph these kinds of advertisements.

In many cases these short advertisements constitute the only surviving documentation about enslaved people who were brought to Britain during the eighteenth century. The advertisements include details about the slaves’ physical appearance (including occupational injuries, West African ritual scarification, and whip scars), clothing, demeanour and mannerisms, age, gender and the motives for and circumstances of their escape. Not all enslaved people in Britain were of African descent, and some of the advertisements depict Native American and Indian slaves. Newman believes that research into runaway slaves can illuminate the multi-racial nature of eighteenth-century British society, and the various ways in which Britons interacted with enslaved people of other races, both as masters and as allies in their efforts to secure freedom.

Runaway slaves provide a window onto Britain’s long and complex historical relationship with racial slavery in the early modern era. Slavery helped build eighteenth-and early-nineteenth-century Glasgow, and the profits of the plantations helped shape and name the Merchant City. Nevertheless, people have little knowledge or understanding of this darker chapter in our history, or the multiracial and multicultural nature of British society almost three centuries ago.
The Commonwealth Games in 2014 was a huge catalyst for change in this respect, as museums and cultural institutions sought to highlight Glasgow’s imperial history, including its historic ties with slavery. During the games period Newman and Mullen consulted on the ‘How Glasgow Flourished’ exhibition at Kelvingrove Museum and Gallery, helping to ensure that slavery was featured. Mullen also received a major grant from Glasgow Life in order to adapt his book on Glasgow and slavery into a series of dramatic performances in and around the Merchant City. Mullen’s work on this, and his participation in the Empire Café (which was co-organised by Professor Louise Welsh) reinforced his belief in the importance of detailed historical research when dealing with such a controversial and sensitive topic as slavery and its place in our history. 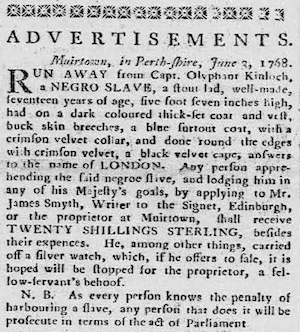 There is great popular interest in this subject. BBC Radio will devote an entire episode of their forthcoming ‘Blacks in Britain’ series to the research of the Runaway Slaves project (to be broadcast during Black History Month in October 2016). Prof. Newman spoke about several of these runaways, including Jamie Montgomery, in Glasgow University’s first James McCune Smith Lecture. Dr. McCune Smith was the first African American to receive a medical degree when he graduated M.D. from Glasgow in 1837.

The ultimate goal of the Runaway Slaves project is the development of a fully searchable online database of eighteenth-century runaway slave advertisements, so that researchers, school learners and the public can access them. Furthermore, the project team will develop these resources for teaching, and Mundell, as a former teacher, is helping to foster links with a network of teachers. Greg Murray (St. Mary’s School, Edinburgh) notes that ‘Slavery is already one of the most taught topics in Scottish schools, but to many students it happened far away involving people very unlike them - runaway slave adverts will perfectly illustrate to our students that Slavery wasn’t just in the Americas.’ The team is also collaborating with a renowned artist from DC Comics in creating a graphic novel about a Scottish runaway slave, to be used in Scottish schools in conjunction with primary sources and teaching materials.