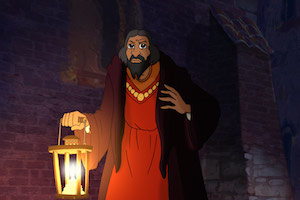 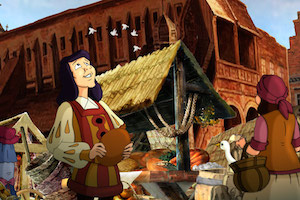 Stills taken from animation ‘The Star of Copernicus’ courtesy of The Animation Film Studio LLC.

There are currently over 15,000 Polish speaking children in Scottish schools. According to the Scottish government’s new education policy primary school children will now be taught two foreign languages as part of the ‘1+2’ scheme. The policy stipulates that children will be taught in their native tongue (1) and subsequently they will be exposed to their first foreign language in primary one and acquire some basic knowledge of their second foreign language by primary five (+2). For those 15,000 Polish speaking children that usually means learning three foreign languages, rather than two. There are ready prepared packages available for teachers to introduce their pupils to French, German, Spanish and Italian, but there has been no comparable Polish language unit and yet, Polish is now the second most common language in the United Kingdom.

Dr Elwira Grossman, from the School of Modern Languages and Culture, and her research assistant Iza Rudzka have been working in partnership with the Glasgow University Arts Lab (led by Professor Dauvit Broun) and Shona Hugh at Education Scotland to create an original Polish Language Unit for Scottish primary schools. Grossman attributed the growing interest in teaching Polish as a foreign language to ‘the pressure of the currently changing linguistic landscape. As u know, a lot of Polish migrants have come to this country since 2004.’ The intention is to introduce Polish as a foreign language taught to primary school pupils, which Grossman believes could have wide-reaching benefits for both Polish speaking and native-English speaking children.

Unfortunately young Poles growing up in Scotland are all too often made to feel like second-class citizens because they do not share the mother tongue of their peers. Not only are they given the impression that they should forget their native tongue in order to learn English immediately, their language is routinely marginalised in favour of Western European languages. Grossman argues that learning Polish in classrooms could actually improve Polish children’s self-esteem, as they would be in a position of knowing something their peers find worth studying. Furthermore, considering the majority of teachers might not speak Polish, native-speaking children could also assist their teachers, ‘we thought there could be an element of empowering Polish children through this particular exercise,’ she said.

Stills taken from animation ‘The Star of Copernicus’ courtesy of The Animation Film Studio LLC.