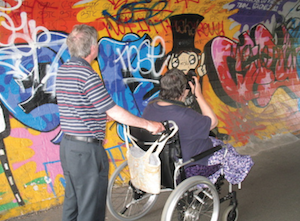 Theatre practice can be a way of exploring real world problems. As Professor Dee Heddon explains, “I’ve created an audio walk, and it’s a very tangible but easily accessible way to experience other people’s experiences.” This audio walk, part of a project called Walking Interconnections, exposes the resilience of people living with disabilities and challenges the assumptions made in environmentalist discourse.

For several years, Professor Heddon has used walking as a research methodology. In a previous project, seeking to make more visible women artists who used walking as their primary material, she would invite women artists to take her for a walk and to discuss their work whilst walking. The artists would point out things that were significant to them, and the environment itself would intervene from time to time, prompting unplanned but nevertheless useful diversions.

The project had political motivations. Environmentalist discourse is exclusive and excluding; there is very little attention paid to different bodies and how they work in different spaces. After Hurricane Katrina, the implications of climate change for people with disabilities became particularly clear. They are often viewed as either a drain on resources or as a vulnerable group, but that simple binary fails to take into account the the valuable contributions that disabled people can make and the different disabilities that exist.

Instead, Walking Interconnections was an opportunity for people with disabilities to make visible their everyday expertise in dealing with the environment.  The project partnered a disabled person with an environmental activist and each partner took the other on a walk of their choice. They recorded themselves talking about the walk beforehand, drew a map and took pictures. After they had been on the walk they drew over the same map, as Professor Heddon says, they “retraced the real over the imagined”.

They were also asked to choose one photo which they felt epitomised their walk. In one of these, one of the walkers in a wheelchair is shown at a junction, not knowing whether to go right or left. It is a good metaphor: everyone faces decisions in life. But for the wheelchair user, in an environment constructed with particular – able – bodies in mind, the metaphor is an everyday reality and the  risks are materially tangible – what lies on the other side of that hill? Will the chair be able to cope? Will I be able to turn round and come back?

From the audio recordings taken on each walk , Professor Heddon made an audio walk that emphasises the resilience of people with disabilities. “Resilience” is also a term people use frequently in relation to climate change. Despite very detailed planning, you still have to be able to respond to reality, which might depart from your informed but still imagined scenario - whether that’s the wrong kind of gate or a locked disabled toilet. Problem solving, creativity and risk taking were  performances that Professor Heddon witnessed again and again. What struck her particularly was the determination of the disabled co-researchers, but also their acceptance that some things weren’t possible. There was nothing passive about this, rather it was quite a complex expression of their agency rather than an admission of defeat.

Key to the project was that the participants were recognised as co-researchers – subject of research rather than objects. Reflecting on the experience, the disabled participants acknowledged that they appreciated having their experience validated by the academic community. Some of them also admitted that simply walking with an able-bodied person allowed them to take risks they wouldn’t have otherwise. Others used the opportunity to explore new places. One participant commented “For disabled people it is too easy to feel paranoid about exposure in the wider world. The project has increased my confidence.”

For others, it had implications about their future activism: “It was so effectively shared and presented, it has made me realise the opportunity and potential to share my experiences in a more theatrical way.”  The project also gave people tools to go and talk to their local governments and organisations to lobby for change.

The project has also gone on to influence policy work. The work has become part of disaster planning documents, encouraging others to engage with disabled communities at the outset rather than at the end point. Potentially, then, this will influence how people engage with such communities during the planning process.

Professor Heddon continues to lead guided audio walk tours, from the Connected Communities showcase in Cardiff to the Only Human? festival in Glasgow. She will also be leading a walk with RSPB staff.

This audio play – made from words spoken by co-researchers during a research project - shows how Performing Arts can engage with big themes and make them accessible and relevant to individuals, academics and policy makers.  Professor Heddon is part of a team of researchers in Theatre Studies in the College of Arts who use creative arts to tackle pressing problems. Please get in touch with ideas, at any stage, by emailing arts-ke@gla.ac.uk.