Reach 06 - The Vikings Are Coming! 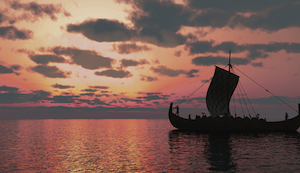 ‌Working with the History Channel’s hit show Vikings has had unexpected consequences for Dr Jim Simpson, as he says: “Now I know the old French word for ‘puke’, which I didn’t before!” But the production team’s use of early medieval languages is part of a desire to give the story greater authenticity.

Vikings follows the character Ragnar and his brother Rollo, who are based on real historical figures. Their power grows from a local base to encompass a much wider sphere until, in this series, set in the 840s, they launch a raid on Paris. This expedition actually happened, and Dr Simpson’s role was to provide translations into medieval French of parts of the dialogue, running a gamut from battlefield instructions to diplomatic negotiation to discussions about religious faith.

Some of the more colourful language Dr Simpson had to provide was in a particularly frank outburst by a French princess. However, such moments do not come from nowhere: they are based on the archives. By looking at early source materials including the epic poem the Song of Roland, it is possible to piece together entertaining and realistic dialogue: “it’s not like the reconstruction is fanciful, and, fortunately, some earlier texts are surprisingly rich in insults.”

Another character, Sindric, spoke Old Low Franconian. Only about 6 translations of Biblical psalms survive as evidence of this language, so Dr Simpson spent some time studying this new material and then had to try and fill in the gaps from other Germanic languages to recreate the spoken word.

Dr Simpson had been particularly interested in the programme because it placed such an emphasis on language. From the beginning of season 1, episodes provide dramatic illustrations of the roles language plays in cultural interaction and how important – for good or ill – understanding, misunderstanding or simply not understanding what people say can be. As Dr Simpson says, “from the beginning, the planning of the story and the script writing and have been very smart. When Ragnar’s war-band first meet the Northumbrians in Season 1, you see Ragnar negotiating with a local sheriff in that dialect. But his own side don’t understand what is being said, so they start getting edgy. Meanwhile, the Northumbrian soldiers can hear the Vikings are arguing, even if they can’t understand them. In spite of the best efforts of the sheriff and Ragnar to keep things under control, it turns ugly. This isn’t just about adding a touch of colour: I don’t think you could have presented this situation with dialogue solely in English. Season 3 takes this focus on contact and cultural exchange a step further by having the Vikings meet the French – an encounter that, historically speaking, created the Normans and their dynasties. And I don’t think I’m giving anything away by saying that the show presents Ragnar’s brother Rollo stepping into his role as first duke of Normandy and ancestor of William the Conqueror.”

The production company also valued Dr Simpson’s input, extending his role as the dialogue proved successful and worked for the actors themselves.

For Dr Simpson, this was an opportunity to engage in a kind of “imaginative curatorship”, where he could “bring the past to life a bit, more or less on its own terms”. He would like to continue looking at this side of translation, which is a different angle to the usual assumption that translators will translate into English.

So if you have any productions that need translations, get in touch through arts-ke@gla.ac.uk