Reach 06 - Made in Glasgow: Almost a Century of Singer 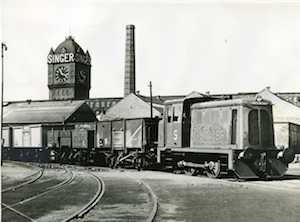 The Singer sewing machine factory in Clydebank was active for nearly 100 years, from 1884 to the industrial decline of the 1980s. In that time it produced millions of sewing machines and the brand became a global name. West Dumbartonshire council now owns the Sewing Machine Collection and Singer Archive with its 6,000 objects including over 800 sewing machines. Two PhD students began to study this archive in 2014, with funding from an AHRC Collaborative Doctoral Award.

Laura MacCalman from West Dunbartonshire Council Libraries and Cultural Services first approached the College of Arts with the idea to start a project. With such a large archive of sewing machines and related objects, they needed dedicated researchers to gain a better understanding of what was in the collection and draw out the interesting and significant objects.

The catalogues, dating from the 1890s to the 1970s, show the extraordinary range of machines designed by the company. They also demonstrate the company’s thorough and comprehensive knowledge of an exceptional number of manufacturing processes. They vary in size and purpose, and include examples of large, early, industrial machines capable of stitching through an inch of paper or leather; ingenious nineteenth- century devices that allowed thread to pass through a small bath of warm wax for the purpose of sewing leather shoe uppers and saddlery; clever rotating discs to allow the edge stitching of knitted fabrics; machines with long carriage attachments to allow the easy assembly and stitching of feather boas; and machines that could automatically sew both buttonholes and buttons on shirts.

“I love the idea of how people relate to a space over time”, says Ruth Turner, one of the PhD students on the project. Her PhD will focus on this relationship between the people and the factory itself, using oral history interviews and archive material to build up a picture.

Lin Cunningham, the second PhD student, is working on a different relationship – that of the women who worked in Clydebank at the factory making the machines. She will explore how the machines were used and the objects that were made with them, particularly by women in the local area.

As Ruth Turner emphasises, the Singer factory shipped sewing machines throughout the UK and the world, playing a huge role in the global developments of the dress and textile industries throughout the twentieth century. The legacy of that influence, now held by West Dunbartonshire Council, is an important insight into how industries, communities and cultures interact at a local level.

In the future, Ruth Turner looks forward to public engagement events around the Clydebank museum that will allow the local community to learn about the history of the Singer factory, particularly “how important it was not only to them but also to the whole world.”