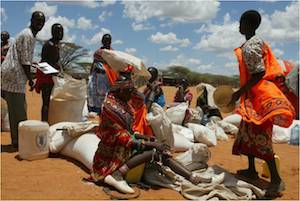 Chemistry might not be the most obvious starting point for a moral theologian, but Dr Julie Clague’s “circuitous” route to the College of Arts has given her a broad base that now sees her working with CAFOD, the Catholic Agency for Overseas Development, on HIV policy and maternal health.

This is one of several projects that Dr Clague is currently involved in as part of her work on Catholic moral theology. For several years, she has been a member of CAFOD’s HIV advisory board and has worked with a Scottish faith organisation SCIAF (Scottish Catholic International Aid Fund). With these two organisations she looked at controversial issues relating to HIV and HIV prevention work.

From this starting point, she began working directly with faith organisations and studying the way in which faith groups are involved in health and development across the globe.  In 2011 she became involved with the Joint Learning Initiative, which is made up of faith based development organisations working with UN partners, policy makers and academics. As she points out, she is ideally placed to contribute: “my own role as a theologian equips me to know some of the controversies that arise in relation to faith and health issues.”

The Joint Learning Initiative was particularly interested in gathering evidence of the contribution that faith groups make to health and development. Many faith groups have tangible assets such as hospitals, dispensaries, or clinics but there are many other intangible ways in which they help that are less easy to quantify.

Faith based organisations might be engaged in development contexts through, for example, health messaging. This is the use of religious leaders to bring ideas about health into mosques, temples or churches – such as information about transmission, avoiding infection, accessing services, or getting tested. Faith groups might also be involved directly in voluntary testing and providing transport for people in rural areas.

However, Dr Clague highlights that some faith groups are not as supportive “by making people more vulnerable to infection by creating messages that stigmatise affected populations”.

So, it is a very diffuse picture, and Dr Clague helped the Joint Learning Initiative to understand better. For Dr Azza Karam, a Senior Advisor at the United Nations Population Fund (UNFPA), “this is significant because the contribution of faiths is under-researched and ill-understood.” Better mapping of these activities can be used both to diagnose problem areas, where faith groups are part of the problem, but also to identify where there is good practice that can be disseminated by sharing information or funding interventions.

For Dr Clague, “that knowledge is really quite a powerful asset.” It can enable the faith communities to seek further funding, if they are doing a good job, but it can also be very useful for policy makers. As funding constraints limit the spending ability of international agencies, they have become more concerned with improving practice and developing the knowledge base of these faith based communities. More than this, as Dr Karam points out, Dr Clague's engagement in this field is “helping to promote dialogue within the Catholic Church on such difficult topics”.

In particular, Dr Clague has focused on HIV and maternal health. By researching reports of how faith communities are engaged in these issues she has been able to create a digest of their involvement. She has also utilised data from sources such as the World Health Organisation, Unicef, and literature produced by the faith communities themselves, available via their websites or annual reports.

The result of her work is a report based on the data gathered as part of the Joint Learning Initiative project. An article will be published by the Journal of Faith and International Affairs and a number of reports are also available directly through the Joint Learning Initiative website on HIV and maternal health as well as a number of other topics. In July, international agencies and governments will meet at the World Bank to discuss the role of faiths in global health and development.

The next stage for Dr Clague is to take advantage of all the different expertise at the University of Glasgow and beyond. She would like to partner with people who are also interested in international development, global health and public health, primarily in the Southern hemisphere. As she says, “we can do more if other people come on board.”

If you are interested in these issues and would like to work with Dr Clague or find out more please contact arts-ke@gla.ac.uk. Although the book will be written initially in English, the intention is for the book to be translated into French too; this will surely spark conversations and debates about this topic which is, as she says herself, still politically sensitive.