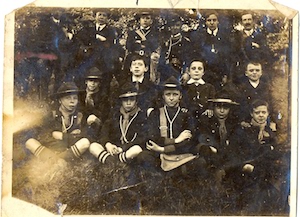 ‌“I was probably ahead of the curve doing Irish-Scottish studies in the 90’s”, says Professor Willy Maley. Now he is part of a committee planning a series of events to commemorate the centenary of the 1916 Easter Rising, in which Edinburgh-born James Connolly played a key role. This anniversary will be a chance to raise awareness of a founding moment in British history and re-examine its complex legacy from a non-sectarian perspective with due attention to the Scottish dimension.

The Easter Rising centred on Dublin’s General Post Office. Although the Rising failed, the summary execution of its leaders led to a surge of support for Irish independence. Thus the event’s importance goes beyond 1916. Overshadowed by the Battle of the Somme and the events of World War I, Easter 1916 remains a decisive episode in Irish, European and world history. Within a few years, Ireland gained partial independence from the rest of the United Kingdom.

The Easter Rising was the moment at which an Irish Republic was first proclaimed, something that some people compare to the American Declaration of Independence. Later, Irish Independence itself also had a profound influence on Britain, with Professor Maley suggesting that it led to the founding of the BBC and later the British Council at a time when British culture was seen as precarious. The role of James Connolly, a founding figure of the Irish Republic, and perhaps also this independence aspect make it interesting from a Scottish perspective.

Through his earlier work on the Scottish perspective on 1916, Professor Maley connected with local historians including Stephen Coyle, Secretary of the 1916 Rising Centenary Committee (Scotland), and Pat Bourne, the Irish Consul General to Scotland. Together, they are organising a whole series of events to mark 1916, including theatre, music, public lectures and publications.

This is a particularly interesting moment to think about the 1916 Rising. Professor Maley approaches it as “an opportunity: post-Troubles, post-peace process, with the Irish Consulate firmly established in Edinburgh, and with the first Irish Consul General, Dan Mulhall, now the Irish Ambassador to Britain. In the wake of the referendum on Scottish independence, with changes in the Irish political landscape, and with the development of Irish-Scottish studies as a major area of academic inquiry the time is ripe for a re-examination of the intertwined histories of these two nations.” As this suggests, it is an ideal time to bring the event back into the public consciousness.

An important aspect of 2016 will involve critically examining the politics of commemoration. Next year’s events will not be a celebration, but a starting point for debate and discussion. Professor Maley emphasises the unfinished nature of the history of the event: it is still being written. The role of women in the Easter Rising was crucial as a significant number of combatants were women, including Coatbridge-born schoolteacher Margaret Skinnider. The stories behind these women are only just emerging. The University of Glasgow also has a direct connection with the event and its aftermath. The Irish Nationalist Club was active on campus, with links to the Irish Republican Brotherhood.

This should partly be a debate about the nature of heritage, history and popular memory, and how the Easter Rising has been represented outside Ireland for the last 100 years, among the Irish diaspora. The public events next year will be important as a kind of public education.

Indeed, there are many individuals and groups around Glasgow with an interest in 1916 and the Centenary Committee will work with each of these. Besides the Irish Heritage Foundation, there are other bodies in Scotland who will undoubtedly commemorate the centenary next year. The aim is to provide events throughout 2016 with the focus around Easter.

With PhD student Kirsty Lusk, Professor Maley is editing a special issue of leading academic journal, the Irish Studies Review, and a collection of writings edited by Coyle, Lusk and Maley for Luath Press entitled Scotland and the Easter Rising is also underway.

Professor Maley hopes the 1916 centenary commemorations will raise awareness of this hugely significant event, and offer opportunities for debate and engagement. There is a website with information about the 1916 Centenary Committee’s plans: https://www.facebook.com/pages/1916-Rising-Centenary-Committee-Scotland/1560620690881872. If you would like to work with Professor Maley or are interested in the events please contact arts-ke@gla.ac.uk.