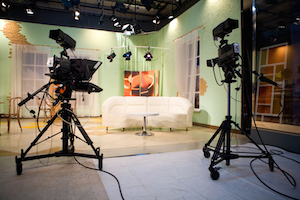 It’s an exciting time for the Scottish film and television industries. After the success this year’s films such as Under the Skin (starring Scarlett Johansson) and the popular programme Outlander, both filmed in Scotland, Creative Scotland is reviewing its film strategy and a Scottish film studio is under consideration. So Dr Lisa Kelly and Dr Katherine Champion were keen to establish whether Scotland really does have the talent – on and off screen – to complete at a global level.

With funding from the Royal Society of Edinburgh, Lisa and Katherine held two workshops, one in Edinburgh and one in Glasgow. These workshops brought together a mix of people from industry and academia, as well as practitioners and policy makers. RSE funding must be Scotland-focussed, but the workshops also drew on international expertise with speakers from the United States and from Denmark as well as from Wales. These places are often held up as a comparison with Scotland but, Katherine says, these comparisons are not always interrogated very closely – but this was a chance to do just that.

The workshops aimed to create discussion between these different groups on four key themes: the definition of talent, the way in which a Scottish workforce can be best supported, the importance of talent clustering in one place, and how new technologies can be used to offer a different way into the screen industries. These themes were developed with stakeholders from an early stage in the bidding process to ensure that the themes they chose were the relevant ones shaping screen industries in Scotland. At the same time, Katherine thought that making comparisons with the opportunities in other countries was a particularly useful feature for those who attended and gave the discussion an outward focus.

The workshops were a great opportunity for networking as well as being interesting and informative, and these discussions hugely benefits academics and the organisations within the industry. For Paul Welsh, founder and producer at DigiCult, the workshops were “stimulating and thought provoking in a most necessary way”. He adds:  “For future health, it's totally essential to analyse, debate and discuss the underlying reasons and conditions which define the sector. Glasgow University and other HE institutions are essential to this process.”

The result of these workshops is an online resource, which brings together the recordings of the presentations as well as reports on each of the workshops written by Lisa and Katherine drawing out the main themes of the discussion sessions.  There will also be links to relevant documents. They hope that this will be a resource that reaches beyond academia and will be accessible to the general public.

Katherine and Lisa have also been busy giving presentations and writing a paper for Cultural Trends, to be published this autumn, as well as organising a panel for August’s ‘Becoming Scotland’ conference in Edinburgh. The panel includes one of the presenters from the workshop based at the University of South Wales who has done a comparison between a BBC drama production in Wales and Scotland. Another panel member is a PhD student working on Tartan Shorts, a short film competition.

For Katherine, the workshops have also crucially helped to set a research agenda for academia. Organisations raised questions and areas for which they needed help, and that will enable future research to be relevant to industry and policy. This creates opportunities for Katherine and Lisa to pursue these questions and work further with the organisations concerned in the future, developing long-term and mutually beneficial relationships.

The workshops also show organisations how valuable it is to work with academics. Lenny Crooks is the former head of the UK Film Council’s New Cinema Fund and now runs a consultancy in New York. He comments that: “From my industry perspective here in the US it is clear that seismic change is taking place in the way that screened art and entertainment is devised, created and delivered.”  He praises the “innovative thinking” at the core of these workshops and advises government funding departments and agencies to “engage more actively with specialized university research teams in the mapping out of future policy and practice”.

For other academics, Katherine and Lisa recommend this model and the Royal Society of Edinburgh workshop funding. Both now work in the College of Arts’ Centre for Cultural Policy Research and as early career academics they said it was often hard to find time to apply for funding bids in your own name alongside your other responsibilities. By taking this positive step, they are now in a good position to make future bids and build on this experience.