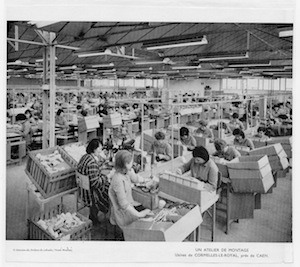 What are the consequences of de-industrialisation? Dr Jackie Clarke is investigating the turn of events in rural France after electrical appliance giant Moulinex went out of business in 2001.

Jackie is from Bathgate, which also famously suffered from de-industrialisation in the 1980s and is known by the slogan ‘Bathgate no more’. She was in France in the aftermath of Moulinex’s closure in 2002 and could appreciate how hugely symbolic it was. After all, Moulinex was one of the biggest French brand names, closely associated with the post-war development of our modern consumer society.

In 2010, Jackie started to think further about the Moulinex example as a way to tie together her interests in consumer culture and the loss of industry. She interviewed ex-workers who were born during or just after World War 2 and began their careers in the 1960s or 70s. This was a time of widespread industrialisation in France, and these workers were a part of that, but they also saw the de-industrialisation of the same region during their careers. Now they face the poverty of long-term unemployment.

For Jackie, this society is a microcosm of a whole set of social transformations that we have lived through since the 1950s, and she hopes to tell this larger story by focussing on the Moulinex example. It is a different story to the one we usually hear in Scotland because there are large numbers of female ex-workers, whereas, Jackie says, the Scottish nostalgia for ship building and mining is often tied up with the idea of a lost working-class masculinity.

To conduct her interviews and better appreciate the situation, Jackie has spent time with several associations of ex-Moulinex workers in different French towns. She has also interviewed policy-makers. Her commitment to the region has been acknowledged with an invitation to give a talk to one of the local communities about her findings. One association hopes to create a museum of industrial heritage, but has struggled to gain political support. In the next phase of her work, Jackie hopes to explore alternative forms of commemoration, taking inspiration from the successful Women’s History Walks that the Glasgow Women’s Library has created around Glasgow.

Jackie aims to build her research into a  book, and the publicity from that work will act as a launchpad for further conversations. Although the book will be written initially in English, the intention is for the book to be translated into French too; this will surely spark conversations and debates about this topic which is, as she says herself, still politically sensitive.