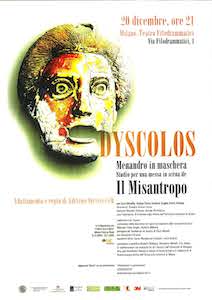 Imagine watching an ancient Greek play that hasn’t been seen for over 2,000 years. For the first time, a project in the College of Arts has recreated Greek theatre masks directly from ancient objects allowing us to understand the crucial role they played in ancient drama. After playing to an audience in Syracuse, the ancient capital of Sicily, the masks now reside in Glasgow’s Kelvingrove Museum and Art Gallery as part of their ‘Expressions’ exhibition.

This new perspective on Greek theatre was the work of Professor Elizabeth Moignard and research assistant Richard Williams. They employed terracotta masks, mainly from an excavation in Southern Italy, in the Kelvingrove’s collection and, using computer-aided design (CAD), turned them into moulds. Malcolm Knight, Director of the Scottish Mask and Puppet theatre very skilfully transformed the miniature terracotta objects into masks that could be worn in performances by living actors.

These actors, from the Commedia dell’Arte company Venezia Inscena, based in Venice, Italy, used the masks to perform plays by the ancient Greek playwright Menander. Elizabeth believes that performing his comedies in masks was ‘an eye opener about how that kind of theatre might work’. Audiences reacted differently to the masks than to a human face, making the costume do part of the work in a large theatre without microphones or close-up screens.

The masks were originally made of stiffened fabric and there are no surviving real examples, so using innovative techniques such as reverse engineering and rapid prototyping to produce the moulds with technology from the University of Strathclyde meant recreating an aspect of the ancient world we could not otherwise appreciate. The successful production of the masks greatly influenced the form of the theatre company’s performance.

Elizabeth specialises in analysing and cataloguing ancient Greek vases but has a broader interest in material objects that extends to contemporary pieces and studio jewellery. She has an on-going relationship with the Glasgow School of Art and actively supports The Hunterian, the University of Glasgow’s museum and art gallery. As a result of this project, Elizabeth is also now a Director of the Scottish Mask and Puppet Theatre and continues to work closely with them.