Reach 05 - Changing the Perception of Govan 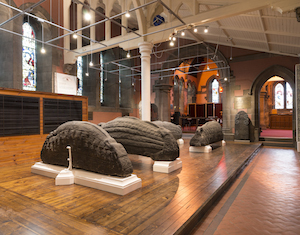 For over twenty years, Professor Stephen Driscoll has been championing Govan’s heritage and changing the perception of Govan along with it. Working with Govan Workspace Ltd, a local regeneration charity, Stephen has helped to uncover some of Govan’s lost treasures – but there is more still to do.

Govan has a fascinating past. Before it was the centre of Glasgow’s shipbuilding efforts in the Industrial Revolution there was a thriving weaving community there. In the medieval period, the Kings of Strathclyde lived, held court and were buried there. But Stephen’s archaeological excavations take us back further to AD 500, the date of the burials he found in the circular churchyard of Govan Old Church. These burials must have been among the earliest Christian burials in Scotland and are certainly the earliest dated examples on the River Clyde.

In 2007, the Church of Scotland combined three parishes and Govan Old Church fell out of use, so Stephen and Govan Workspace Ltd did an options appraisal with funding from Historic Scotland and then applied to the Heritage Lottery Fund. With help from the experienced people at Jorvik Viking Centre, York and Northlight Heritage, they began the re-display of the sculptures inside the church in 2012 to provide new signage and lighting. This year, the final year of the Heritage Lottery Fund money, they are hoping to get over 10,000 visitors – up from last year’s 6,000.

Stephen’s contribution to this is crucial. As Ranald MacInnes, Head of Heritage Management at Historic Scotland says, Stephen is ‘an exemplar for the role universities can play in helping communities see their heritage’s potential fully realised’. From Ranald’s perspective, Stephen’s involvement has enabled academic recognition of the collection but also, ‘and perhaps more importantly, for it to become a well known and loved site across a wide audience’.

In the longer term, Stephen can see this being a ‘big destination…a kind of gateway to pilgrimage in Scotland and the medieval past’. By emphasising the church’s sculptures and using casts and other replica material, visitors could also learn about other early Christian communities such as Iona and Whithorn, which many wouldn’t otherwise see. This would also tie in with the academic interests of Stephen and others in the College of Arts.

At the moment, space around the church is a problem; there is no disabled access and parking is difficult. Govan Workspace Ltd have just received funding for a boardwalk between the Govan Ferry landing point (opposite the Riverside Museum) and the church, but prior to this Stephen says the church was something of a ‘dead end’. Hopefully now it will get more people passing by, making it more of a community resource and open space for people to enjoy.

Glasgow City Council could make a real difference here. Although they own the land surrounding the church, they have so far done little with it. Yet if the church could expand its boundaries closer to the river it could contribute far more to this historic part of Govan including hosting weddings which could also provide an economic boost to the area.

Working with Govan Workspace Ltd has been ‘inspirational’ for Stephen. Pat Cassidy and his team are really embedded in the community and constantly consult with the local people, helping to regenerate buildings and spaces that have fallen into disuse. It is Pat who has found the money to make the riverside walkway to connect up with Govan Old Church. David Robertson, the architect who redesigned Cottier’s Theatre in the West End, is also involved with the project, as is the Church of Scotland of course. Stephen is impressed with the strong social justice movement based within the Church of Scotland, of which he was not previously aware.

For now, Stephen is looking forward to getting back to doing archaeology on the site. Excavations can generate publicity so he is waiting for an opportune moment to make sure the church is at its best. For school children and local people, Stephen hopes the church will become something they want to visit, but he knows that building cultural awareness is a long process.

If you can help Stephen and Govan Workspace Ltd with their on-going regeneration project, please get in touch via email:  arts-ke@gla.ac.uk.