Reach 04 - Being onside with UEFA 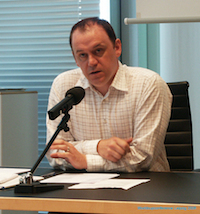 Imagine the Champions League final, one of the biggest sporting competitions in the world. Its media profile is off the scale and so is the prize money. Millions of people around the world will be watching and you are the person in charge. How do you train someone to be that person, to do that job?

Raymond Boyle is a professor of Media Communications and has spent his career researching the media. Often this research has been done by interviewing practitioners and through focus groups, gathering material from within the industry and bringing an academic analysis to it. Clearly, as Raymond says, this work “resonated for UEFA” (the Union of European Football Associations), because that is who he is working with now to help them, eventually, deliver that all-important Champions League final.

UEFA is an umbrella organisation with 54 members, which are national associations of varying sizes. It is one of the largest and most powerful of the six confederations that make up FIFA (Fédération Internationale de Football Association), the world body of football. The employees of UEFA are an international bunch, including a number of Scots, who work at the headquarters in Nyon in Switzerland. UEFA is seen as an innovative organisation, and part of this innovation comes through its desire to drive up professional standards.

The Diploma for Football Management is a key part of this, and that is where Raymond fits in, working alongside UEFA and the University of Lausanne, the awarding institution. He has produced four modules for the course about PR and sports; media operations; social media; and the relationship between the media and corporate social responsibility. The content that Raymond generates is underpinned by his research. The process is a learning curve for Raymond, too, but he is getting positive feedback. He finds working with UEFA “refreshing” because there is a very clear objective about what they want to deliver and they are a good example of what can be achieved with the necessary ICT support and financing.

Raymond also works with an industry representative, Alexis Dedes, a media officer for UEFA, to integrate his content within a blended learning programme that, as Alexis says, “examines real issues facing the football industry”. The relationship between the academic and industry perspectives is at the core of the project as an industry representative can help to bring out the practice-based reflections, adding another perspective to the content. Some content is made available through short recorded lectures delivered via an interactive online platform.  There is also a discussion forum and participants are assessed on their contributions as well as three face-to-face seminars with a final oral presentation exam before a graduation ceremony at UEFA HQ in Switzerland.

Participants are typically middle managers from across the national associations, although the course is highly competitive and numbers are limited to 35. Participants come from a range of areas within their national associations and this means that they are, to some extent, taken out of their comfort zones. In a positive way, this allows them to have a holistic view of activities taking place within the wider organisation. More than just networking, however, this course gives them a real academic qualification, the Diploma, as well as professional development.

At the end of the course, participants produce a portfolio which can serve as a document of recommendation when they return to their national associations. In this way, the course has a real impact on how the associations are run: for example, the Dutch FA was able to re-organise aspects of its communication strategy to align more effectively with UEFA’s key objectives. Participants become advocates for change.

UEFA general secretary Gianni Infantino thinks highly of the programme, saying: "We at UEFA believe very much in these courses, in knowledge-sharing and exchange; we think that we can always improve and learn.” As a result, UEFA are just starting to evolve the course into a rolling programme that is hosted within national associations. This will vastly expand the numbers of people who can benefit from the course and will speed up the eventual aim of raising professional standards across the organisation. The first national programme started in Finland, with versions planned by the associations of England, Germany and Croatia already in place. Raymond has played a key role in developing content for the communication and media module in this programme, content which, again, is characterised by a connection to experts from academic and industry contexts.

Although the project began on a small scale, its growth shows that there is clearly an appetite for this kind of scheme. As Raymond points out, it is not just UEFA who might find this useful. Other industries and large organisations could also work with academics in this way to provide professional development for their members.