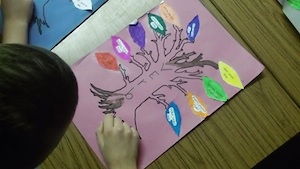 “How do you say football boots in Latin?” was one of the first questions the teachers of the ‘Literacy through Latin’ project were asked by pupils in their class of primary school children. As Jennifer Hilder, the project’s Co-ordinator, explains, the project aims to help children improve their English by learning Latin, becoming comfortable with vocabulary and useful grammatical terms. But it is also an opportunity to learn about Roman civilisations and to have fun. Even knowing that the Romans didn’t wear football boots, because they didn’t play football, leads to questions about what they wore instead, and what they did do in their spare time: going to gladiator fights and chariot races, perhaps, where you might have a favourite team, just like today.

The project is supported by the Oxford-based educational charity The Iris Project, which was founded in 2006 by Dr Lorna Robinson and has helped introduce Latin to primary schools around the UK. After an application led by Professor Matthew Fox, Classics in the College of Arts was granted funding from the University’s Chancellor’s Fund and since October 2013 five student volunteers (undergraduates and postgraduates) have taught Latin in St Anne’s Primary School, St Michael’s Primary School and Sacred Heart Primary School, all in Glasgow’s east end. These five student volunteers from Classics collaborate to produce a plan for the term and for each individual lesson. As one, Alison Greer, admits, the teaching experience is “very rewarding - and also hard work at times!”

In the first term, lessons concentrated on nouns and adjectives, and the subject and object of verbs. The second term moved on to thinking about more complex grammatical ideas such as the different possible cases of a noun and the use of prepositions. Another student volunteer, Hollie Crombie, says “The grammar-heavy nature of Latin seems to have benefited the children” and she is surprised how quickly they grasp these difficult concepts. The class teachers are equally positive about the experience. Lynda McWaters from Sacred Heart Primary comments that this project “has had a major impact on the students’ attainment and achievement in all areas of literacy”. This includes an improvement in writing skills and logical thinking. Importantly, the children themselves agree: when asked what they have enjoyed in lessons so far, they gave a range of answers from “learning about gods” to “myths and legends”, but also “doing fun worksheets” and even “apostrophes”!

To build on their enthusiasm for Latin and knowledge of the Roman world, all three classes are going on a class trip supported by Oxford University’s ‘Communicating Ancient Greece and Rome’ programme. They will see The Hunterian’s exhibition ‘The Antonine Wall: Rome’s Final Frontier’ and they will also have the opportunity to handle objects - coins, shoes, pottery fragments - from the museum's collection. Afterwards they will go to a site on the Antonine Wall itself, only half an hour’s drive from the centre of Glasgow. At the wall, the children will see the famous 'lilia' (defensive pits where Romans would have stuck pikes and stakes to ward off invaders), the wall and the remains of the fort. This will introduce them to the idea of what archaeologists do and also help them connect the museum exhibition and objects to the real, everyday life of people in the ancient world - what would it have been like up there on a windy, rainy hill for Roman soldiers from the Mediterranean? – as well as thinking more deeply about Scotland’s history and heritage.

The flexibility of the Curriculum for Excellence has allowed the schools to devote one of their literacy lessons each week to learning Latin, and the benefits to the children are real. As David Byrne, Quality Improvement Officer for Glasgow City Council, comments: “Staff and children in the participating schools have enjoyed sharing approaches with  University staff and students. We hope that we can extend the project to involve other schools in Glasgow.”

As this implies, the same model could also work in other primary schools across Scotland (the Iris Project is also running in St Andrews) and potentially secondary schools, too, and Latin is not the only subject that could be taught in this way. In the future, it is hoped that more children will be able to take advantage of the knowledge and learning in the College of Arts. As the Head Teacher of Sacred Heart, Liz Gonzalez, comments, this has been an “effective partnership” and the student volunteers provide “good role models” for the children too. Teaching children is also a valuable experience for the students, especially as children will always have questions to which we don’t know the answer. How do you say “football boots” in Latin?