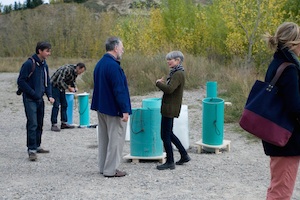 “I’m standing with river water draining from my cupped hands, trying to hold on to it, waiting at traffic lights to cross the road,” says Minty Donald, describing Water Carry, one of the performances she and collaborator, Nick Millar, staged in Calgary, Alberta in September 2013. The performance was part of a project titled Guddling About, developed during a three-month residency in the Albertan city.

At access points to the Bow River, which runs through Calgary, Minty or Nick scooped water into their hands and walked as far as they could from the river, stopping when they had no water left. The traffic lights Minty reached were in the city centre, the heart of the financial district. Like the other performances and artworks that Minty and Nick produced in Calgary, Water Carry was intended as an invitation to engage with water in fresh and imaginative ways. In this performance, the water was partially in control — when it had drained through Nick or Minty’s fingers, the performance was finished.

This work ties into Minty’s broader practice and research about landscape and environment, where she tries to move beyond human-centric ideas of history and culture to focus on non-human materials and to speculate about the kinds of life-force they might have. Can we imagine the world from the perspective of rocks, or trees, or water? And how might trying to do this change our understanding of our place in the world?

The Calgary scheme, called Watershed+, is supported by the city’s Utilities and Environmental Protection (UEP) Department. Tristan Surtees, Watershed+ lead artist, explains that it is the first of its kind, integrating creative practice within an organisation in such a deep way. Artists are engaged at the beginning of projects and valued as equal participants. As Tristan says, they are not engineers – they cannot necessarily solve problems. But, he believes, artists can help to frame questions and offer new perspectives.

For a further Calgary artwork, Minty and Nick visited tributaries of the Bow River and “borrowed” water from each. The idea of “borrowing” water was influenced by research into indigenous North American cultures and non-Euro-American attitudes towards water. Minty and Nick discovered practices where permission was requested from a river or lake before water was taken from it. Minty admits she did feel “a bit self-conscious” talking to rivers, but believed it was a way of acknowledging the river’s animacy and recognising that she and Nick were intervening in the “natural” water cycle.

The water they borrowed featured in an exhibition at Glenmore Dam in Calgary, which was the culmination of their residency. Minty and Nick calculated the proportion of each tributary that made up the Bow River in the city centre and invited members of the public to mix their own “Bow River” in a specially labelled bottle, before returning the water to its source. For Tristan, the enthusiasm for this activity spoke volumes. Visitors of all ages made their own “river” where the water became “imbued with a deeper meaning”. By reconstituting its component parts, visitors changed their relationships with the river.

For another artwork in the exhibition, Melting Species, Minty and Nick estimated the water content of eleven species common to the Bow River watershed and froze those volumes in water pipes of different diameters. The frozen cylinders of water were released from their moulds and the columns of ice slowly melted. People found the installation poignant with associations of melting polar ice caps and diminishing species. According to Tristan, people who saw the work are still talking about it. He thinks that “the resonance of the project will live on for a long time”.

Minty is currently exploring the potential for the project to be transposed to other locations. She and Nick are developing Guddling About with the River Clyde in Glasgow, supported by Creative Scotland. There are significant differences between the rivers Clyde and the Bow and in how the inhabitants of the two cities interact with them. The Bow River is the main source of drinking water in Calgary and is also used for recreational purposes such as fishing, rafting and canoeing. The Clyde in Glasgow, heavily modified to support industrial use, remains polluted, despite significant recent improvements in water quality. Minty is interested in discovering how the project might translate to Glasgow, perhaps inspiring Glaswegians to engage imaginatively with the Clyde and to re-think what an urban river might be. Currently, she and Nick are talking to river users and stakeholders, including rowing clubs, the Scottish Environment Protection Agency, Clydeport, Glasgow City Council and the Riverside Museum, about their relationships with the Clyde. Minty and Nick would be very interested to hear from anyone who is involved with the River Clyde and who might be prepared to share their thoughts and knowledge.