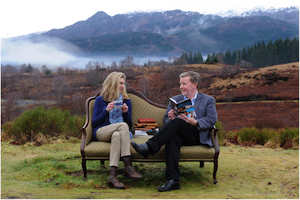 It was arguably Sir Walter Scott who helped Scotland to become a prime location for literary tourism. In fact, Jenni Steele from VisitScotland thinks it was the “most fashionable, must-visit tourist destination” at that time. A new Traveller’s Guide to Literary Scotland produced by Professor Alan Riach in collaboration with VisitScotland puts Scotland and its writers back on the map (literally) for literary tourism.

Jenni and Alan met at a conference in Loch Lomond on Scottish literature and tourism, where they talked about how the university’s expertise in Scottish literature could work together with VisitScotland’s knowledge of, and access to, the tourism industry with the aim of making people better informed.

Alan had been working on a map of literary areas for some time, thinking of it as an educational tool that could be used in schools and universities, but he had the idea that the map could be turned into a small booklet. The booklet would contain mini essays on places in Scotland that were associated with particular writers, poems or stories and they could be linked numerically to the numbered places on the map.

To promote Scotland, Jenni is constantly on the lookout for “new and interesting hooks to inspire potential visitors”. Having heard about Alan’s idea and after seeing the success of film tourism, she was intrigued to find out whether literary tourism could take off in the same way.

While Alan had expertise in creating content, VisitScotland had experience of visitor requirements and marketing, so throughout the collaboration each side relied on the other. They had to think carefully about how to cover every region of Scotland, and, of course, to decide which writers and which places should be included. Once the 60 places had been chosen, Alan wrote the text. VisitScotland were responsible for curating the accompanying photographs and the design of the booklet.

After the booklet was launched by Jenni and Alan in the Trossachs there were over 180 pieces of media coverage in the UK and overseas. The guide has won an award through the Chartered Institute of Public Relations and Waterstones bookshop asked that the booklet be stocked in all their Scottish branches. The guide has been reprinted twice so far.

For Jenni, the real success of the guide is its positive impact on the visitors’ experience of Scotland: “By providing visitors and people who live here with additional hooks to engage in cultural tourism activity, it can only serve to enhance their enjoyment of our amazing heritage.”