Reach 03 - Heritage Textiles: Knitting is back! 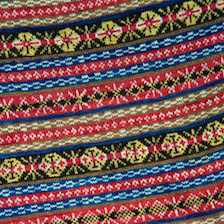 Knit, says Professor Lynn Abrams, is “very, very sexy” right now, and with publicity about her recent project appearing in Vogue Knitting, it is hard to disagree. A series of workshops and a public study day funded by the Royal Society of Edinburgh (RSE) highlighted the richness of Scotland’s heritage and skill in knit as well as the public interest in finding out more.

The workshops were an opportunity to engage with people from outside the academic world, and although they were originally intended for academics to attend, lots of interested people saw the adverts and turned up. Lynn and Dr Marina Moskowitz, who also worked on the project, invited representatives from wool producers Jamieson and Smith in Shetland and also from New Lanark. They also linked up with several SMEs such as Di Gilpin, the famous knitwear designer and producer in Fife, and Rosie Eribé from the Scottish Borders, who founded Eribé Knitwear and brought a much-admired suitcase of samples to the workshop.

The public study day attracted about 100 people to an informal series of talks at The Lighthouse, Glasgow, to which, again, lots of amateur – and some very good! – knitters came. Although Lynn and Marina had thought that they would use these ideas for a larger research project, Lynn thinks “it’s actually more fun, and has more immediate impact, when you can do these smaller events.” Partly these events help to bring knit back into the limelight, but they also contradict the idea that knitting is only a domestic thing that women do. In fact, as the workshops showed, “it’s a very skilful activity, which can also be quite a money-spinner.”

When Lynn and Marina first started researching the project, Lynn admits that they were surprised to find how important textiles still were to the Scottish economy: "We knew historically it had been huge, but didn't quite realise how big it still was." Harris Tweed is a good example of a traditional textile adapted by  big fashion industry names. There are many other Scottish designs that are distinctive and globally recognisable: Lynn and Marina were in discussion with Kathryn Logan from the Moray Firth Partnership, where they ran a project on the hand knitting of Gansey fishermen’s jumpers. Fair Isle is another example of a Scottish design that has been harnessed by the modern industry and is now used worldwide. One of the themes that arose during the workshop series was authenticity, and Lynn notes that, as with food, people are increasingly interested in tracing the origins and heritage of their clothes, right back to linking the wool with the farm from which it comes.

With the remaining funds from the workshop series, Lynn and Marina worked with Fiona Scott, the owner of Make Works, on a research project about another of these well-known designs: Sanquhar knit, a two-coloured patterned knit from the Dumfries region. By looking at archival resources and talking to local knitters she has found out more about the construction of the pattern, as well as its heritage and history in the local area. Fiona credits Lynn with an insight into the heritage of knit that has proved invaluable for the project, as well as a “refreshing attitude to academic research”, which gave Fiona the freedom to use a variety of methods for research and documentation.

Lynn and Marina are hoping to pursue this idea of provenance and heritage further, by working with the Singer Collection at Clydebank Museum. Singer sewing machines are famous worldwide but were made in Clydebank, West Dunbartonshire. There is a huge collection of 700 sewing machines and other related items that the College of Arts hopes to interpret and enhance for a wider audience  with the help of a Collaborative Doctoral Award. In a sense, this is the beginning of the story for many textiles, at the factory where the sewing machines were produced with which textiles could then be created.

To continue this work in the future, Lynn and Marina have applied for another, larger RSE Network Award, which would allow them to do more public engagement events. Lynn says they have “lots of crazy ideas” to tie in with the Commonwealth Games and the anniversary of the First World War. Watch out for a Knitter in Residence at the University of Glasgow, too.