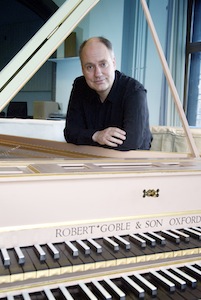 As the Gardiner Chair of Music in the College of Arts, John uses his some of his research time within the College to prepare recordings which are performed by the Dunedin Consort group and recorded by Linn Records.

Linn Records is well known in the Scottish music scene for making sound equipment and as a record company. In certain circles, Linn Records is seen as pioneering for the types and varieties of music it releases, the formats in which it releases music and its marketing strategies. As both John and the Dunedin Consort had worked with Linn before, they were an obvious choice to approach about making recordings.

As Alfonso Leal from Dunedin Consort explains, “Our association with Linn gives us access to some of the best sound producers, press contacts and distribution channels.” But the collaboration is essential for producing award-winning records in an already saturated market. From Alfonso’s perspective, John’s leadership and musical direction have given Dunedin a unique viewpoint, which has attracted valuable media attention. The recordings must also be of the highest standard, and here Dunedin is lucky to have “some of the best performers in the field” commented Alfonso.

In practical terms, the largest part of the cost of making the recording goes towards paying these talented musicians. In order for the recordings to be made, Dunedin Consort must raise the money needed, which can be anywhere between £40,000-85,000. The money comes from donations, sponsorships, subscriptions, and the royalties from previous records.

The performances by Dunedin Consort are often of early eighteenth-century music. Although these are known pieces, John explains that “there are several elements of them which need research.” This might be the text of the music used, or even whether that text should be followed to the note. In some performances, “deviating from the notes is something that is historically valid,” so interpreting and performing these pieces requires a great deal of expertise from John and his performers. The time John uses to do this historical research is, he says, “the university’s contribution”.