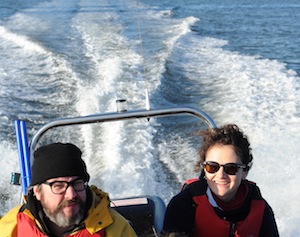 Cara Connolly and Martin Clark are filmmakers who established Connolly Clark Films, and began working with Dr David Archibald after making a short film together. Now, they are planning to work together again on an experimental documentary about medieval Govan and the Kings of Strathclyde.

Few people have heard of the Kings of Strathclyde, and not many people know that they once resided in Partick Castle, which stood on the site of today’s Morrisons in the west end of Glasgow. They moved there in 870AD after a group of Gaels and Vikings sailed from Dublin and led a siege on their former base at Dumbarton Castle. They were particularly attached to a spot in Govan called Doomster Hill, which they crossed the river to use for passing legislation, holding assemblies and crowning their kings. There are no records of Doomster Hill now, and David is interested in why this period of Glasgow’s history is so little known.

This was important for Martin and Cara too, who realised how patchy their own historical knowledge of Scotland was. They are looking forward to filming the school children of Govan to find out how much of their local history they are aware of.

David has a theory, that the loss of the history, like the loss of the site itself, is, in part, “accidental vandalism”. The complicated relationships and struggles between the different power structures of the Kings of Strathclyde (originally from Wales), the Gaels and the Vikings doesn’t fit neatly into  “nation-building narratives” that we are usually given. Both Martin and Cara are intrigued by David’s questions about how Scottish they really are, and Cara describes the film as a “Who Do You Think You Are? for Scotland!” As David emphasises, “these battles were not about Scotland gaining independence,” so it doesn’t get talked about to the same extent. It is notable, as David says, that very few people who live in Glasgow today know anything about this historical period.

With Martin and Cara’s help, the film will tell this history in an engaging and experimental way. It was important to David to work with them because, as he explains, “Cara and Martin have a strong background in photography: they are both very talented artists and very easy to work with".

By working with an independent company, rather than with a television company, David also believes they will have more freedom: “Television imposes its own form on how history is presented, but we can be freed up a bit; we can do whatever we want. The content dictates the form.” The final film will be screened at film festivals and in Govan itself and also made available on the Internet.

The film will draw on Professor Stephen Driscoll’s extensive research on the archaeology of Govan, thereby making that accessible to the general public. This project is part of a broader, industry trend in the last few years that has led Film and Television Studies in the College of Arts to be more outwards facing. As David says, the accessibility of the film will also partly be the result of how the film is produced: “The reason I think companies like Connolly Clark Films are useful for the university is because they’ve got the ability and skills to produce work that illustrates academic research in a cinematic and visual way.”

As David has lived in Govan for 25 years, he can also use his personal experience to make the story relevant and bring it to life.

Funding for the film has come from two different sources – £5,000 from the University of Glasgow’s Chancellor’s Fund and £5,000 from Historic Scotland. In David’s opinion, the Chancellor’s Fund was the stamp of approval that led directly to the second fund from Historic Scotland. For Martin and Cara, “having the University of Glasgow's resources is a huge source of support.”

According to David, the film will come out in 2014, “just in time for Cannes!”