Academics from the Centre for Battlefield Archaeology (CBA) are teaming up with the BBC and several conservation bodies in an attempt to answer one of Scotland's biggest historical mysteries: the exact location of the Battle of Bannockburn.

The BBC will be working with academics from the College of Arts to mark the 700th anniversary of the battle by following the progress of a new archaeological dig which will attempt to clear up the uncertainty surrounding one of the most important dates in Scottish history.

The programme, due to be filmed over 18 months and broadcast in Spring 2014, reunites the successful partnership of Neil Oliver (below left) and College of Arts Archaeologist Dr Tony Pollard (below right) from 2003’s ‘Two Men in a Trench’ series. 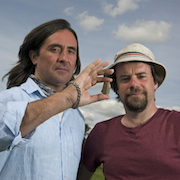 “The BBC are keen to create a programme on the true history of the battle of Bannockburn and attempt to identify the real locations,” said the BBC’s Richard Downs. “The team at the Centre for Battlefield Archaeology were always the natural choice for this project. The expertise of Dr Iain Banks and Dr Tony Pollard is unique, however coupled with Pollard and Oliver’s past successes the partnership was a perfect fit.”

Funding for the project is a three-way initiative. The National Trust for Scotland own the area of land around the flagpole and the iconic statute of Robert Bruce, where, to date, the majority of excavation work has taken place. The project findings will be incorporated into the new visitor centre being constructed to mark the 700th Anniversary, with support from the Heritage Lottery Fund.

Derek Alexander, Head of Archaeological Services for the National Trust for Scotland, explained: “We are very excited about working in partnership with Iain and Tony on this project. They are widely regarded as the leading battlefield archaeology experts in the country and will be key to the success of the investigations. Partnering with the BBC will allow us to successfully communicate the findings to the wider public, something both Iain and Tony also have a great deal of experience with.”

A related but separate project will focus on lands around Cambuskenneth Abbey. This is the location of the Parliament where Robert the Bruce requested that all landowners attend and pledge allegiance to Scotland shortly after the battle in November 1314 or be disinherited and lose all their lands in Scotland. This investigation will be grant-funded by the Conservation Foundation in conjunction with Insight Vacations, who last year sponsored the Centre’s project at Mont St Quentin on World War One's Western Front.

Dr Banks explained the importance of the project:

“The Battle of Bannockburn is an iconic moment in Scottish history. We have a lot of historical evidence about the battle, from Scottish sources and English sources, but what we don’t have is any physical evidence of exactly where the battle took place. Eight different locations have been proposed for where the fighting took place but no one knows which of these is correct. There are no confirmed artefacts that could evidence any of these as a battlefield. However, equally important as finding evidence of a battle site is understanding the physical and human geography of the area.”

Dr Pollard added: “Finding medieval battlefields using archaeological techniques is notoriously difficult but what we have here is the opportunity to subject the landscape in which the battle took place to a thorough multi-faceted investigation, which, whatever the results of the archaeology, will provide a unique insight into the events of 1314. We did limited work there ten years ago for Two Men in a Trench, but came away with more questions and answers, so for Neil, myself and the rest of the team this is unfinished business.”

The project is set to run until late 2013. Whether the resulting TV programmes will turn out to be myth-busters is in the hands of the archaeologists.