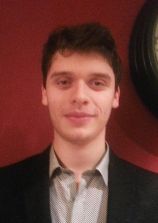 Ferdinand von Goetzen, a Politics student at Glasgow University is one of the owners and Editor-in-chief of Affairs Today, a new peer reviewed, online student journal focusing on global business and politics issues. In the latest issue of Affairs Today, Ferdinand interviewed Simeon Saxe-Coburg-Gotha, the last King and former Prime Minister of Bulgaria. Simeon II is the last man in history to bear the title of Tsar, one of the last 3 reliving heads of state from World War II and one of the only monarchs in history to become head of state through democratic elections. The interview is about the development of Bulgaria's relationship with the EU, Russia and its other neighbours as well as Simeon's views on some of the most pressing current affairs. Read the interview online here.

Affairs Today was founded in February 2013 by Alexandre Gianasso and Maximilian Linhard who also study at Glasgow and has been growing at a rapid pace: it now boasts over 20 contributors. The editorial team plan to release 20,000 copies of their print magazine throughout the UK by March. The journal’s prime aim is to bring a student point of view to top business and politics news in order to share those perspectives with fellow students around the world. In addition to their daily articles on current political and business issues, the journal also treats its readers to interviews where both older and younger game-changers share their insights and experiences.

Affairs Today is always looking to expand its base of contributors. If you are interested in writing for Affairs Today you can contact them at: editor@affairstoday.co.uk.