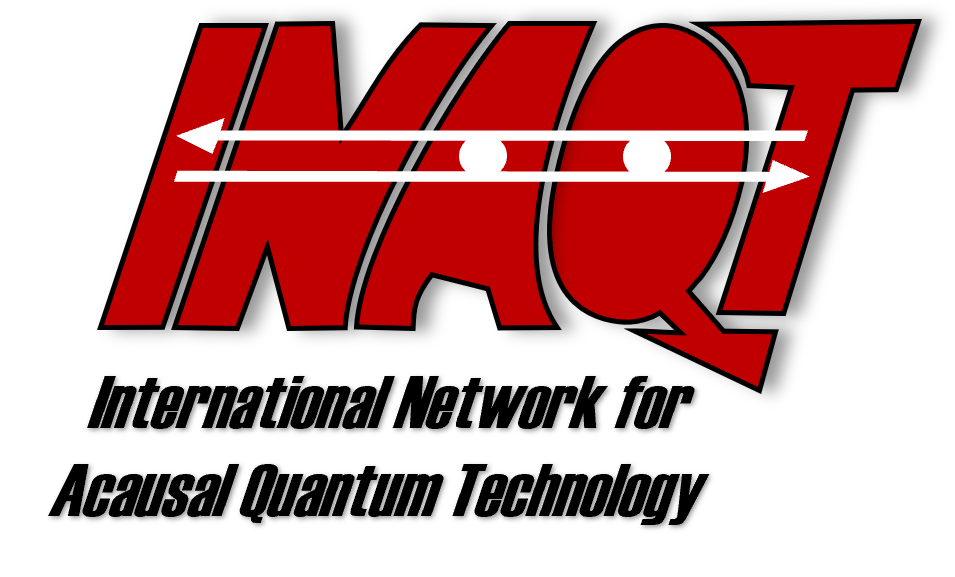 The launch event for the new EPSRC funded International Network for Acausal Quantum Technology will take place over two half-days, Thursday 31st March and Friday 1st April. This will be an online event, running each day between 9am and noon UK time (BST: note the clocks change the previous weekend), to accommodate participants in various time zones. This will officially launch the network and will include an introduction to the network and participants, as well as tutorial talks from experts in indefinite causal order.

Invited talks will be recorded and posted here when available:

Speaker bio: Jacqui was born and bred in Manila, Philippines. Hearing her high school physics teacher complain about quantum physics, she became curious and googled "quantum physics"—she has been hooked ever since. She holds BS Applied Physics magna cum laude and MS Physics degrees from the University of the Philippines. She finished her PhD at the University of Glasgow (in sunny Scotland!) where she was a researcher for seven years. In 2015, she moved to Brisbane to join the Quantum Technology group at the University of Queensland. In 2016 she took up an ARC DECRA fellowship with the same group. In 2019, she took up a Westpac Research Fellowship and formed her own team, Qudits@UQ. Jacqui is recognised for her work on the shape of photons as carriers of quantum information. She has received several prestigious national and international awards which include: a L'Oreal-UNESCO For Women In Science award in 2017 (one of four in Australia), the Ruby Payne-Scott Medal of the Australian Institute of Physics for excellence in early-career research in 2018, and a L'Oreal-UNESCO For Women In Science International Rising Talent Award in 2019 (one of fifteen awards globally).

She is currently a reader and Westpac Research Fellow. She is also a chief investigator at the Centre of Excellence For Engineered Quantum Systems (EQUS).

Outside work, she is a busy mum to three lovely boys, and an occasional painter. She also loves sharing her research to the wider community, example here.

Abstract: Indefinite causal structures not only enable advanced quantum information processing, but can also model causal structures in non-classical spacetimes near massive objects in spatial superposition. I will introduce the main concepts and methods and give an overview of the state of this rapidly developing field.

Speaker bio: Caslav Brukner is Professor at the University of Vienna, Austria and the scientific director of the Institute of Quantum Optics and Quantum Information (IQOQI-Vienna). He earned a Doctor of Technical Sciences from the Vienna University of Technology (1999). He has held positions at the Imperial College London (2004), Tsinghua University in Beijing (2005-2008), University of Belgrade, Serbia (since 2008), the International Institute of Physics in Natal, Brazil (since 2017) and the Perimeter Institute (since 2022). In 2015 he was awarded Marko Jaric Award "for contributions in the field of quantum foundations". Since 2021 he is a foreign member of the Serbian Academy of Sciences and Arts. His primary research interests are foundations of quantum physics and quantum information theory, and more recently, their relation to gravitational physics.

Abstract: Indefinite causal order provides new ways to connect quantum processes with one another. In this talk I will present some applications of indefinite causal order   to quantum communication and quantum metrology. In quantum communication, a communication provider that  connects two transmission lines in a superposition of alternative orders can enhance the communication between a sender and a receiver, sometimes permitting the transmission of messages even in the extreme scenario where the original transmission lines output white noise. In quantum metrology, the ability to probe a sequence of processes in a superposition of orders can boost the precision beyond the limits of standard quantum setups where the order is fixed. In particular, I will show an example where indefinite causal order offers a quadratic increase of the Fisher information  with respect to the Heisenberg limit.

Speaker bio: Giulio Chiribella is a professor at the Department of Computer Science of The University of Hong Kong and a visiting professor of the Department of Computer Science of the University of Oxford. Before joining the University of Hong Kong, he held faculty positions at Oxford University and Tsinghua University, Beijing. His research interests are in quantum information theory, and in the foundations of quantum mechanics, including quantum causality, the information-theoretic reconstruction of quantum theory, and the study of information processing in general probabilistic theories. In 2010, he was awarded the Hermann Weyl Prize for applications of group theory to quantum information.  Currently, he is a Croucher Senior Research Fellow, a Senior Research Fellow of the Hong Kong Research Grant Council, a CIFAR-Azrieli Global Scholar, a member of the Standing Committee of the International Colloquia on Group Theoretical Methods in Physics (ICGTMP), and a Visiting Fellow of Perimeter Institute for Theoretical Physics.

Speaker bio: Giulia Rubino is a Post-Doctoral research fellow in quantum optics and quantum foundations at the University of Bristol. She received her MSc. degree from the University of Rome “La Sapienza” in 2015 under the supervision of Prof. Fabio Sciarrino with a thesis on the orbital angular momentum of light. She was then awarded a uni:docs fellowship by the University of Vienna to work with Prof. Philip Walther on experimental indefinite quantum causality. After completing her PhD in 2021, she is now working as a post-doctoral research fellow at the University of Bristol, where she has been awarded a Newton International fellowship by the Royal Society to work in collaboration with Dr. Jonathan Matthews and Dr. Paul Skrzypczyk. Her interests range from indefinite causality to quantum thermodynamics, where she contributed both with experimental and with theoretical works.