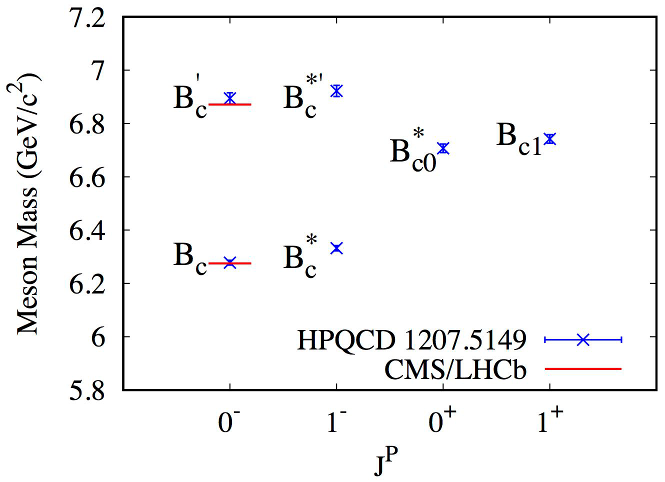 A particle that is an ‘excited’ bound state of a bottom quark and a charm antiquark has been discovered at the Large Hadron Collider and its mass is in agreement with a 2012 prediction made by a Glasgow/Cambridge team led by Prof. Christine Davies. The team (part of the HPQCD collaboration) used a numerical technique known as lattice QCD to solve the theory of the strong force, Quantum Chromodynamics. This enabled them to calculate the masses of several bound states of bottom and anticharm, each with the quarks in a different configuration, collectively known as the Bc mesons. The CMS and LHCb collaborations have both now reported in 2019 the first clear evidence for the member of this set called the Bc' meson.

The lightest Bc meson, known simply as the Bc, has the bottom and anticharm quarks spinning in opposite directions so that its spin is zero. This is the lowest energy configuration for bottom-anticharm and simplest to calculate in lattice QCD. In 2005 Glasgow members of HPQCD (with the Fermilab lattice collaboration) successfully predicted the mass of the Bc meson, ahead of its discovery by Glasgow members of the CDF experiment at the Fermilab Tevatron collider. The large mass of this meson, 6.27 GeV/c2(where the proton mass is 0.94 GeV/c2), along with its quark-antiquark content that meant a proton collider was needed to produce it, made it hard to find experimentally.

In 2012, armed with the computing power of STFC’s DiRAC facility and the much-improved QCD calculations that that allowed, HPQCD were able to revisit the topic and calculate the masses of many more states. They predicted the mass of the Bc* meson, a particle with spin because the bottom and anti-charm quarks are spinning in the same direction inside it. They also predicted the masses of excited states of the Bc and Bc* , known as the Bc' and Bc*'.  These are the analogues of the electronic radial excitations of the hydrogen atom. The mass difference between the Bc' and the Bc is then a consequence of the way in which the bottom and anti-charm quark are bound together through strong force interactions. To predict this mass difference from QCD requires the numerical techniques of lattice QCD because QCD has such complicated non-linear interactions.

The figure shows the HPQCD predictions for Bc meson masses along with the current experimental values. Mesons containing b quarks are the Achilles heel of the Standard Model since their rare decay processes are sensitive to the existence of new particles. The Bc meson family provides a new chapter in this search that theory and experiment are now beginning to exploit. The Glasgow PPT team in the HPQCD collaboration remain at the forefront of this work and is pushing ahead with more precise calculations of Bc masses and differential decay rates on DiRAC 2.5.