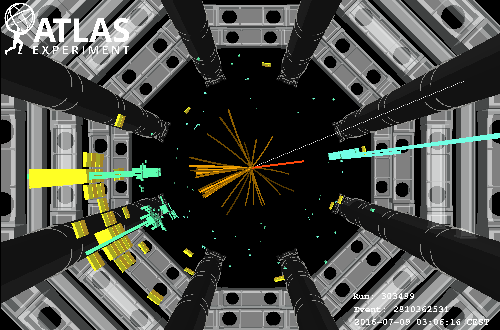 For the second time this summer, University of Glasgow physicists are celebrating a groundbreaking new measurement of the Higgs boson from the ATLAS Collaboration at CERN’s Large Hadron Collider (LHC). This time, they have observed the Higgs boson decaying into a pair of bottom (b) quarks.

Professor Aidan Robson, who leads the University of Glasgow’s team on this analysis work, explained, “Our theory of particle physics – the ‘Standard Model’ – predicts that most Higgs bosons should decay to b-quarks. But because there are many other processes that look similar in the ATLAS detector, it has taken us a long time to be able to observe it. Though we discovered the Higgs boson in 2012, we are learning new things about it all the time as the LHC continues to run.”

ATLAS Spokesperson Karl Jakobs said, “ATLAS is proud to announce the observation of this important and challenging Higgs boson decay. While the result is certainly a confirmation of the Standard Model, it is equally a triumph for our analysis teams. During the early preparations of the LHC, there were doubts on whether this observation could be achieved. Our success is thanks to the excellent performance of the LHC and the ATLAS detector, and the application of highly sophisticated analysis techniques to our large dataset.”

The ATLAS Collaboration first presented a preliminary result of this observation on 9 July at the 2018 International Conference on High-Energy Physics (ICHEP) in Seoul. Today, in a joint seminar with the CMS Collaboration, ATLAS presented results that have been submitted for publication to Physics Letters B. They are based on all the data delivered by the LHC so far, and use machine learning technology and new analysis techniques to reach a significance that is accepted by particle physicists as a conclusive observation.

This is one of the most demanding analyses carried out at the LHC. Since the LHC’s proton collisions produce b-quark pairs in great abundance, it is essential to select events where the Higgs boson appears alongside a W or Z particle, which makes the events easier to identify. Dr Andy Buckley, Senior Lecturer at the University of Glasgow explained, “This result wouldn’t be possible without the understanding of Standard Model processes that we have built up through the 8 years of the LHC’s operation. Finding these tiny Higgs signals among the overwhelming noise of similar-looking collisions required the work of hundreds of physicists, who made measurements and developed our theoretical models of those Standard Model backgrounds.”

The discovery relies on the excellent performance of the ATLAS detector, including the inner tracking detector used to identify b-quarks, which was partially constructed in Glasgow. As well as work on the key detector elements, UK groups including the Universities of Glasgow, Birmingham, Liverpool, Queen Mary, Oxford, and UCL have played critical roles in the analysis of the data over the past seven years. This includes work on reconstruction algorithms, data collection and cutting-edge analysis techniques, all of which culminated in this historic achievement that marks a crucial step forward in our understanding of the Higgs boson.