The main topic I have been working at for the last few years is entitled The Slavonic Languages in Axiological Perspective. It focuses on the interaction between language, culture and politics in cultural history of Slavs and deals with evaluative and inter-cultural reception of different strata of Russian and other Slavonic languages.  My recent articles and academic papers are a part of this project.

I have reviewed books on Croatian, Czech, Polish, Russian and Slovene linguistics.

This topic resulted from my involvement in art photography.  It focuses on art-photography in the late USSR and Post-Soviet Russia. In 2005-2013 I have recorded a series of interviews with prominent Russian photographers which I have used in my Russian C20 Visual culture course, academic papers and numerous lectures before students and general public in Scotland and abroad. I am currently interestend in the phenomenon of Lithuanian photography in the USSR and its influence to the Russian artists.

5. In search of the ‘Slavonic genius of language’: the language critique and linguistic reflections of Czesław Miłosz and Joseph Brodsky. In Print, to appear in Modern Language Review ,Volume 109, Part 3, 2014, pp. 726-748.

Khairov, S. (2017) Letters from Russia. Monochrome Photography Exhibition. Lecture: On the semiotics of photography in the USSR and after: some notes from within. [Exhibitions]

Khairov, S. (2017) Letters from Russia. Monochrome Photography Exhibition. Lecture: On the semiotics of photography in the USSR and after: some notes from within. [Exhibitions]

I  currently co-supervse (with Dr John Dunn) one PhD candidate working  on cohesive devices in the Russian social network VKontakte.

Russian at all levels and in most formats

Starting from the Russian icon and the 19th century painting, the course concentrates on the Russian avant-garde, Soviet and Post-Soviet art and visual environment against wider European background  with special attention to the following topics:

The Slavonic Languages (taught at SMLC)

Starting from the Old Church Slavonic and the methods of reconstruction of the Common Slavonic language this course is intended to acquaint students with the principal distinguishing features of the individual Slavonic languages from a synchronic and diachronic perspective, with selected issues related to the processes of creating their codified literary form and to give students some basic practical knowledge of particular languages from each Slavonic sub-group.

This course is intended to provide students with a thorough training in advanced translation techniques and deepen their awareness of the relationship between language and culture.

I am regularly invited to give  open lectures  on the history of Russian art photography and  my own photo work at photography clubs and galleries in Scotland and abroad.

My photo work can be seen here: www.khairov-photo.co.uk

A poet James Sutherland-Smith has written 36 poems on my photographs. We are currently looking for a publisher for this completed project entitled Photopoems. 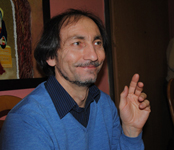