In 2013, John Bates was invited to be a member of the Advisory Board of the publishing series “Badania Filologiczne nad Cenzurą PRL”.

With   colleagues Drs Margaret Tejerizo and Zsuzsa Varga John Bates  has recently taken over the editorship of the bi-annual British journal Slavonica.

“Translation and Dissent in Stalin-Era People’s Poland.” The Carnegie Trust (2014-15)

Comparative Literature 2B: Gogol’s The Nose

Cultures of Commitment: Wat’s Lucifer Unemployed, Wajda’s A Generation, Szczypiorski’s A Mass for the Town of Arras, Kapuściński’s The Emperor

Mass Media in Communist and Post-Communist CEE (Convener): Polish Media under the Communists and since 1989.

Poland and Its Neighbours (1000-1795): Late Medieval and Renaissance social and political thought, Sarmatism, Memoirs and travel writing, the Enlightenment in Poland-Lithuania.

Byzantium and the Slavs: Rus’, The Decline of Kievan Rus’, the Rise of Muscovy, the Ottomans and the Balkan Slavs

Subtitling Film and TV: Ideology and Ethics in Subtitling

The Deep Medieval Structures of Eastern Europe and Russia 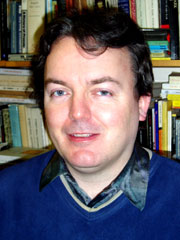