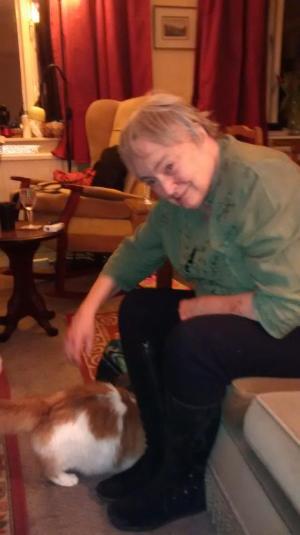 Mary was born in the USA and moved to Oxford University to do research before moving to Glasgow to take up a post in the then Logic Department in 1967. She had a wide range of interests in philosophy, covering especially philosophy of mind, aesthetics, Greek philosophy and logic, but, more than that, she took a wider view of the subject than was then orthodox. She placed aesthetics at the centre of philosophy rather than at the periphery and found imaginative and sometimes playful ways of getting serious points across.

Among Mary’s publications were several articles and two books, “A Study of Self-Deception” published in 1980, and “The Snake and the Fox: An Introduction to Logic” (1999). Characteristically, Mary found a fresh approach to this material; a reviewer wrote of it “The book teaches all the basics the reader needs to know about logic in a truly enjoyable and innovative way”. Attempting to push the boundaries of the subject further, she worked for a while with Bill Lyons on designing a philosophical game (The Mind-Brain Game).

As a teacher Mary was caring as well as imaginative. She related very comfortably to people, and the students found her approachable and patient. She was an excellent colleague.

In her very quiet and unassuming way she was a very clever, cultured and engaging person. She had an informed appreciation of fine art, particularly painting, prints and drawings, and had an impressive personal art collection.

Mary enjoyed her retirement, attending painting classes and spending some time in the garden. But over the last months things fell apart. Her partner, Mike Lessnoff, took a bad fall and needed a level of care which Mary was not able physically to provide. Then she herself fell seriously ill with sepsis and was taken into hospital. Her brother John and nephew Daniel were a constant presence, and organized visits from friends. The physical decline was inexorable, but Mary remained positive and outgoing throughout, showing remarkable courage.

(By Pat Shaw, with input from Bill Lyons, emeritus Professor of Philosophy, TCD.)

Mary Haight: a Renaissance Philosopher living in the 20-21st century.

I met Mary for the first time in October 1992 at her Office in the West Quadrangle (the prestigious building that the Department of Philosophy had next to the Chapel, before the invasion of the Business Department there). As a young postgraduate, looking to find support in his grand research schemes for his PhD in Philosophy of Mind and Language, I was hesitant about what I would find. Professor Richard Stalley (who was acting as a Head of the Department at the time) led me to her office (with the sounds of an organ playing in the Chapel) and said to me that I will be able to find the support I was looking with her guidance. He was right! After the initial 4-5 meetings, she managed to put me in touch with the reality of researching and writing the PhD (a formidable task at the time!). In one of the first few meetings (during which many philosophers in the Department, most notably Dudley Knowles whose office was next to Mary’s would leave in a hurry due to our loud discussions about what I had to do and what I would like to do- my vision encompassed almost 2000 years of philosophical output starting with the Presocratics and ending with later Wittgenstein and Sartre), Mary with exasperation said: “Costas you are not going to write an Encyclopedia! You are going to do a PhD! Choose two philosophers and limit your discussion to them!” From that time on, we started discussing the two philosophers I chose with her guidance (Wittgenstein and Sartre) and our discussions took a turn much more close to a friendly chat about the correct interpretations of passages in Wittgenstein and Sartre and the structure of the PhD. I chose to share this with you so that you can understand the character of Mary: strong willed and persistent, confident and kind; definite in her aims and what she wanted to do with herself and others and a good problem solver, who could think on her feet and improve relations with others without going to extremes.

Mary was one of the three women philosophers that the Department of Philosophy had as permanent members of staff at the time I joined in as a PhD student: Mary Haight was teaching Presocratics, Philosophy of Mind, Aesthetics (with Eva Schaper) and Logic; Eva Schaper was teaching  Aesthetics (with Mary Haight) and Kantian Philosophy; and Elizabeth Telfer, who was teaching Moral Philosophy and Applied Ethics. Note that this took place in Glasgow at a time when many Departments of Philosophy in UK did not have even one woman philosopher as an academic teacher in the permanent staff lists. All three gave to the Department unique abilities and expertise and gave to the Department a unique character. But it was Mary, in my experience, who was able to build bridges between colleagues and co-ordinate different scholarship pursuits to the benefit of the Department and the students under her care. It was due to her efforts that I managed to have both Jim Edwards and John Porter as my guides in Wittgenstein: Jim with his deep analytic tradition knowledge and expertise and John with his immersion into the Welsh school of interpreting Wittgenstein provided valuable and varied perspectives in my philosophical training in Wittgenstein. I remember reporting to her an argumentative discussion between Jim and John on the correct interpretation of a recent Cora Diamond’s book that we were studying in an advanced postgraduate seminar, causing her great amusement. She urged me to disregard any opposition between them and get the best of them from their discussions. Mary herself was more impressed by Hazel Barnes (in terms of Sartre interpretations) and Iris Murdoch and Elizabeth Anscombe (in terms of Wittgenstein). In her published work one can find influences not only from Greek philosophers (her favourites were Pythagoras and Plato) but also Modern and Contemporary philosophers, like Descartes, Wittgenstein and Sartre.

Even though she did not have children of her own, she spread her love between the many nephews and nieces she had (through out the world), her brother, sister and rest of her family (including her long time companion Michael Lesnoff), her cats and her students (and she had many). Even though she was friendly towards all, she was hesitant in allowing people to take photos of her and was quite idiosyncratic in her behaviour at times: I remember once she asked us to remove a TV screen from a classroom before she starts her discussion of a Presocratics topic we were discussing in a senior class (something that I considered at the time bizarre, but later I recognised this as a characteristic of renaissance genius- check her work “Gunddh” in Cogito, Volume 7, Issue 1, 1993, Pages 63-67, where she depicts the bizarre adventure of Dr Ko Korako Guddh, who being a Gunddhian can not recognise expressions in others). Other idiosyncrasies include an extreme simplicity in her clothing and appearance (she used to tailor her own clothing) reminding Leonardo’s Simplicitas est ultimum ruditatis.

In terms of the way she thought about her classes and ways of teaching, she was always trying to experiment with ideas and new approaches and always to collaborate with colleagues to the benefit of her students. She was very good friends with Professor Eva Schaper (https://www.universitystory.gla.ac.uk/biography/?id=WH4039&type=P ) and one of my fondest memories during my very first week in Glasgow was to see her at Eva Schaper's office at the West Quadrangle ground floor Philosophy Building enjoying Eva's piano performance of a famous musical piece, discussing with Eva afterwards about how they could move the piano in one of their classes and teach aesthetics and music their students with Eva’s performing the famous piece she was playing (at the end I think they brought segments of the class to Eva’s room). A highlight in her career was her collaboration with Catherine McCall in teaching teachers about how to do philosophy in schools. It was there that she started thinking about doing cartoon like sketches to teach logic (a fruit of which is her  work “The Snake and the Fox”: an imaginative and fun way to learn logic through characters like the Snake and the Fox, Granny, Gussie, Rene Descartes and Miss Nightingale, along with a cast of other minor characters and sausage machines). Her published work was significant (check the biography and her list of publications in a webpage I did for her shortly after her retirement here: http://www.geocities.ws/quinceychat/ ), but she always knew when to stop and dedicate herself to other pursuits like art. When she finally went into retirement, she dedicated herself to painting and sculpting becoming for some time a student at the Glasgow School of Art (which was close to her house). Her garden at Hill Street in the city of Glasgow has many of her sculptures and the walls of her house were fully covered with paintings (some of them being her accomplishments, some of them being portraits of her family -her mother being a famous Hollywood actress).

I am going to miss our chats and I will always admire her many abilities, her resolve and her fighting spirit till the end: proving wrong the medical predictions of her attending physicians on her condition, she managed to get better with her persistent efforts, right before the final few weeks.  Again, here she followed another Renaissance great in proving: Ego amare qui potest risus in tribulatione, qui potest colligere vires ex angustia, et crescere fortis per reflexionem. Est negotium parum mentes ad abhorrent, sed in cuius cor est firma, et cuius conscientia approbat mores eorum, persequetur eorum principia usque ad mortem.